What does Diane mean?

[ 2 syll. dia-ne, di-ane ] The baby girl name Diane is pronounced in English as Day-AEN or in French as Diy-AEN †. Diane is of Indoeuropean origin, and it is used mainly in English, French, and German. It is derived from the element deiwo with the meaning 'light, deity'. The French form Diane was popular with Renaissance aristocrats who loved hunting and thus the name, for its allusion to Diana the Greek goddess of the hunt.

Diane is a shortening of Diana in the English, French, and German languages.

What are the Variant Forms of Diane?

Diane is unusual as a baby name for girls. Its usage peaked in 1955 with 1.163% of baby girls being named Diane. It ranked at #14 then. The baby name has since experienced a marked drop in popularity, and is of only infrequent use today. Among the group of girl names directly related to Diane, Diana was the most regularly used in 2018. Diane has mostly been a baby girl name, although in the past century it has also been used for boys. In 1958, the name Diane was given to 348 times as many baby girls than boys. 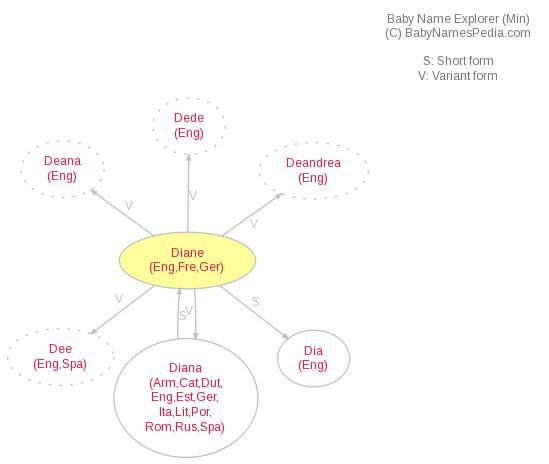