What does Dick mean?

[ 1 syll. dic(k), di-ck ] The baby boy name Dick is pronounced DayK †. Dick is of Latin and Germanic origin. It is used mainly in English, German, and Dutch. The name first developed as a medieval diminutive of Richard, reflecting the difficulty that English speakers had in pronouncing the trilled Norman 'R-'. It became a common English name by the 17th century, and in the 19th century, it gave rise to other diminutives such as Dicky and Dickie.

In addition, Dick is a variant transcription of Benedict (English).

Dick is also a familiar form of Diederik (Dutch).

Dick is also a shortening of Frederick (English).

Dick is also an English and German shortening of Richard (Czech, Dutch, English, French, and German).

Variant forms inherit both the origin and meaning of Dick.

The familiar forms Dickie (English) and Dicky (English) are other variants of the name.

Dick is uncommon as a baby boy name. At the modest height of its usage in 1934, 0.107% of baby boys were named Dick. It was #138 in rank then. The baby name has seen a marked decline in popularity since then, and is of only irregular use now. Within the family of boy names directly related to Dick, Richard was the most frequently used in 2018. 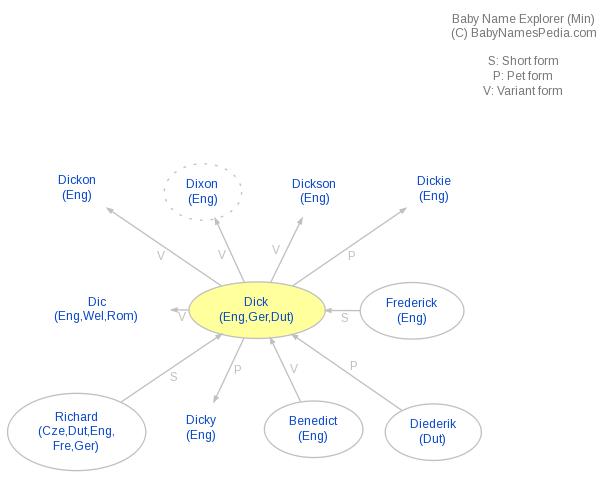