What does Dieter mean?

[ 2 syll. die-ter, di-et-er ] The baby boy name Dieter is pronounced as DIY-T-er †. Dieter is used chiefly in the German and English languages. It is derived from Gothic and Germanic origins. From Germanic roots, its meaning is warrior of the people - in this context, Dieter can be used in the English and German languages. It is a two-element name derived from the words 'theud' + 'heri' which mean people, race + army, warrior respectively. Diether (Germanic) is an older form of Dieter. The name was borne by Saint Theuderius (-575), who founded several monasteries in Vienne.

In addition, Dieter is a variant of the name Derek (Dutch, English, and German) in the German language.

Dieter is also a variant of the name Dietrich (German, Romanian, and English) in the German language.

Didi (familiar form in English and German) is another variant of Dieter.

Dieter is unusual as a baby boy name. It is not listed in the top 1000. Within the family of boy names directly linked to Dieter, Derek was the most frequently used in 2018. 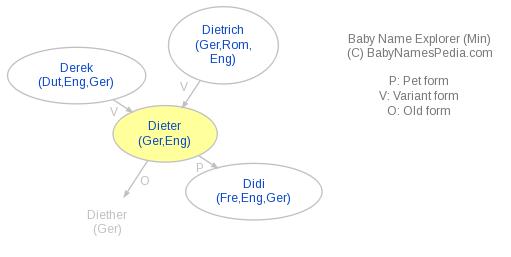