What does Dolly mean?

[ 2 syll. dol-ly, do-lly ] The baby girl name Dolly is also used as a boy name, though it is far more popular for girls. It is pronounced as DAAL-iy- †. Dolly has its origins in the Old Greek and Spanish languages. It is used largely in English. From Old Greek roots, its meaning is 'gift of god; pain; doll'. The name first developed from Dorothy in the 16th century, and it later gave rise to the English word doll in the 17th century. Nevertheless, in modern times, the name is sometimes bestowed as a derivative of the English word. It has also developed as a form of Dolores in recent times. In literature, the name has been made known by the beautiful Dolly Varden in Charles Dickens' historical novel Barnaby Rudge: A Tale of the Riots of 'Eighty (1841), and the formerly minor character Dolly Levi in Thornton Wilder's play The Matchmaker (1955) who inspired the hugely successful musical Hello, Dolly! (1964) by David Merrick. The short form is known from the mistress Doll Tearsheet in William Shakespeare's historical play Henry IV, Part 2 (1596-1599).

Dolly is a diminutive (English) of the English, German, and Spanish Dolores.

Dolly is also a diminutive of the English Dorothy.

Dolly is unusual as a baby girl name. Its usage peaked in 1908 with 0.035% of baby girls being named Dolly. It had a ranking of #316 then. The baby name has dropped out of favor since then, and is currently used only on a very modest scale. In 2018, among the family of girl names directly related to Dolly, Dorothy was the most widely used. Dolly has mainly been a baby girl name in the last century. 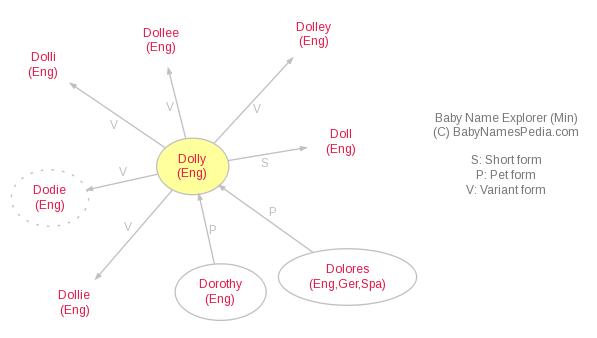