What does Dolores mean?

[ 3 syll. do-lo-res, dol-or-es ] The baby girl name Dolores is pronounced as Dah-LOWR-ihS (English) or Dow-LOW-RehS (Spanish) †. Dolores is mainly used in the English, German, and Spanish languages, and it is of Spanish origin. A biblical name, it is derived literally from the word 'dolores' meaning pain. The name refers to one of the many Spanish titles for the Virgin Mary, Maria de los Dolores, which means 'Mary of the Sorrows'. It was originally used for girls born on the feast day of the Seven Sorrows of Mary, which falls on September 15. Traditionally, Maria was considered too sacred to use, therefore girls were often christened with other associated names. The pet forms later came to be associated with Lola Montez (1821-1861), the courtesan and mistress of King Ludwig I of Bavaria, and Lolita (1955), the novel by Vladimir Nabokov which gave rise to the English pop culture term 'Lolita' as a reference to a sexually precocious young girl. The name Dolores was first adopted by English speakers in the 19th century, and it saw a boost in popularity in 20th century USA due to the influx of Spanish immigrants. It has traditionally been popular with Roman Catholics.

Dolores is rare as a baby name for girls. At the peak of its usage in 1930, 1.099% of baby girls were given the name Dolores. It ranked at #13 then. The baby name has since dropped out of favor, and is today of sporadic use. In 2018, out of the group of girl names directly linked to Dolores, Lola was the most commonly used. The name Dolores has mostly been a girl name, though it has also been given to boys in the past century. In 1935, the name Dolores was given to 130 times more girls than boys. 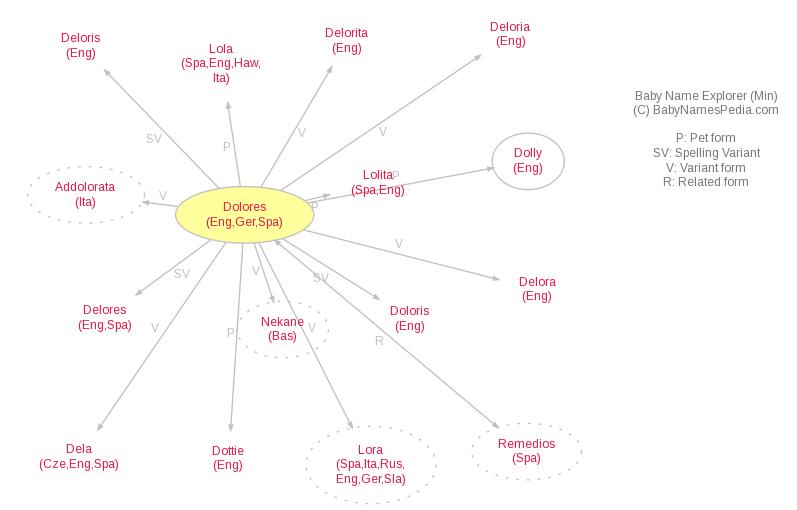