What does Donald mean?

[ 2 syll. do-nal(d), don-a-ld ] The baby boy name Donald is pronounced in English as DAAN-ahLD †. Donald is used chiefly in the English and Scottish languages, and it is derived from Celtic origins. The name's meaning is world ruler, world-mighty. It is derived from the elements 'dubno' meaning world ; 'val' to rule. The '-d' in the name originated from English speakers attempting to pronounce the silent sound in the original Gaelic name Domhnall. The name could also have been influenced by Germanic names such as Ronald. The name was borne by two kings of the Scots and the Picts in the 9th century, and it has also been associated with the prominent Scottish clan MacDonald. It therefore had an initially strong Scottish flavor, which was eventually lost by the 20th century as the name grew in popularity among all English speakers. The name has in modern times been made famous by the popular cartoon character Donald Duck (1934-). The name Donalda (English and Scottish) is the female form of Donald.

Donald is a widely used name; it has 28 variants that are used in English and other languages. Variants used in English include Donal (used in Irish too), Donaugh, Donát, Donel, Doneld, Donelson, Donild, Donnall, Donnel, Donnell, Donold, Donuld, and Donyld. The short form Don (used in Scottish too), and the diminutive forms Donnie (used in Irish too) and Donny are other English variants.

Donald is a classic favorite. At present it is still fairly popular as a baby name for boys, though not to the extent it was in the past. Its usage peaked in 1934 with 2.865% of baby boys being given the name Donald. It ranked at #6 then. The baby name has since experienced a marked loss in popularity, and is today of occasional use. In 2018, its usage was only 0.028% and its ranking #526, but it was nonetheless the most commonly used among all boy names in its group. Donald has mostly been a baby boy name, though in the past century it has also been used for girls. In 1944, the name Donald was given to 375 times as many baby boys than girls. 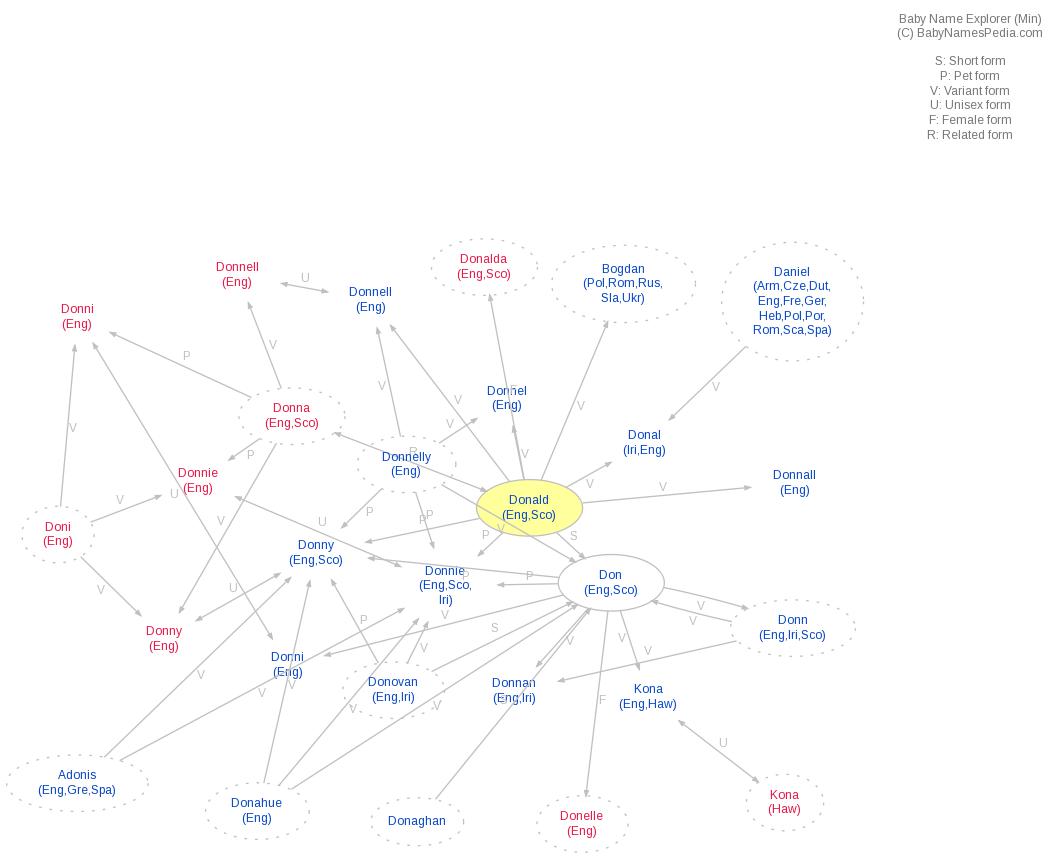