What does Dorcas mean?

[ 2 syll. dor-cas, do-rc-as ] The baby girl name Dorcas is also used as a boy name, though it is far more popular for girls. It is pronounced in English as DOWR-KahS †. Dorcas is of Aramaic origin and it is used mainly in English. It is a biblical name derived from the word dorkas with the meaning 'gazelle, doe, roe'. The name appeared in the Bible as the Greek translation of the Aramaic Tabitha rather than a name in its own right; it does not appear to have been used as a personal name in ancient Greece. Due to the biblical mention, it was adopted by early Christians, and by English Puritans later in the 16th century. In Scotland, it is sometimes used as an Anglicized form of Deòiridh. The name has been borne by a key character in the Elizabethan era stage play The Merry Devil of Edmonton (1604) and a shepherdess in the William Shakespeare play The Winter's Tale (1623).

See also the related form, the Gaelic and Scottish Deòiridh.

Dorcas is unusual as a baby girl name. Its usage peaked modestly in 1923 with 0.011% of baby girls being named Dorcas. It had a ranking of #613 then. The baby name has experienced a marked drop in frequency since then, and is of only irregular use now. Among all girl names in its family, Dorcas was nevertheless the most popular in 2018. Dorcas has in the last century been mainly given to baby girls. 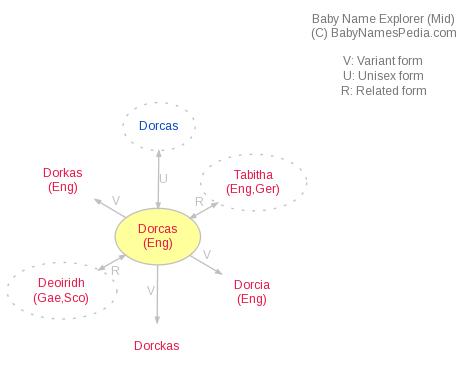