What does Dorian mean?

[ 3 syll. do-rian, dor-i-an ] The baby boy name Dorian is sometimes used as a girl name. It is pronounced in English as DOWR-iy-ahN †. Dorian is largely used in the English, French, and German languages, and it is derived from Old Greek origins. The name's meaning is of the Dorian tribe; gift. Dorianus (Latin) and Dorieus (Old Greek) are original forms of Dorian. The Dorians were one of the three major ancient Greek tribes, and they were the predecessors of the Spartans. In Greek mythology, they were descended from Doros son of Hellen, the patriarch of the Hellenes; Doros' name could be ultimately of the Greek 'doron'. The given name was first invented for the gothic horror novel The Picture of Dorian Gray (1891) by Oscar Wilde, who probably took it from the Greek tribal name. In the novel, the beautiful but depraved youth Dorian traded his soul to remain young while a painting in his attic aged for him and gathered the marks of his debauchery. Despite the macabre associations, the name has been gradually adopted by English speakers, as the name could also be bestowed in admiration of the ancient Greek tribe. The name Doris (English, German, and Greek) is the female equivalent of Dorian.

The name Dorian is used to a great extent; it has 27 variants that are used in English and other languages. Variants used in English include Darian, Dore, Dorea, Doree, Dorey, Dori, Dorie, Dorion, Doriun, Doron, Dorrea, Dorree, Dorrey, Dorri, Dorrian, Dorrie, Dorrien, Dorrion, Dorriun, Dorry, Dorryen, and Dorryn. The diminutive form Dory, and the variant spelling Dorien are other English forms. Doriano (Italian), Dorin (Romanian), and Dorján (Hungarian) are foreign variants of Dorian.

Dorian is fairly popular as a baby name for boys. The name's popularity rose from the 1960s up to the 2000s. Its usage peaked modestly in 2000 with 0.031% of baby boys being given the name Dorian. It ranked at #399 then. The baby name has since fallen in popularity. In 2018, its usage was 0.028% and its ranking #521, but it was nonetheless the most popular among all boy names in its group. In 2018, Dorian was twice as popular as the subsequent ranked name, Darian. Dorian has mostly been a baby boy name in the past century. 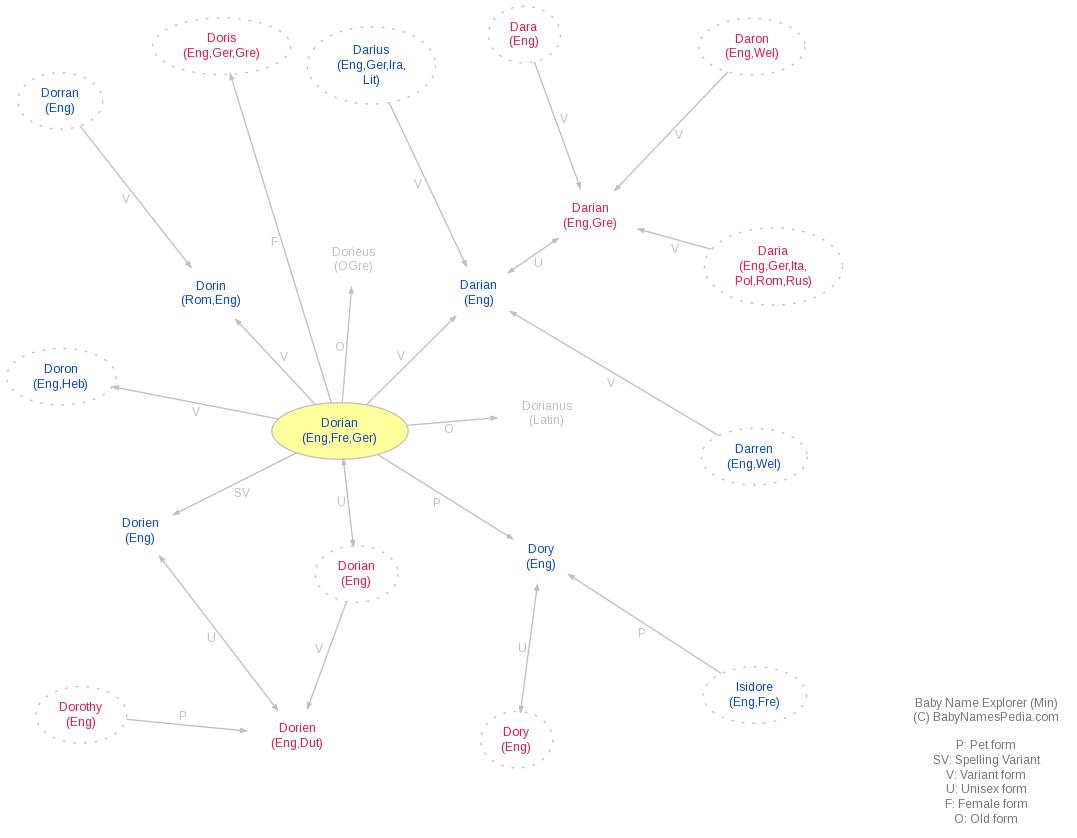