What does Dorinda mean?

[ 3 syll. do-rin-da, dor-i-nda ] The baby girl name Dorinda is pronounced DaoerAHND-ah †. Dorinda's origin is Old Greek and English, and its use, English and Spanish. The name is derived from the combination of Dora with the suffix '-inda'. It was first used in 17th century literature. It has been made known as the name of a key character in George Farquhar's comedy The Beaux' Stratagem (1707).

Dorinda is a variation (English and Spanish) of Dora (English, French, German, Italian, Spanish, and Czech).

Dorinda is also a variation (Spanish) of Dorothy (English).

Both the origin and meaning of Dorinda is inherited by all variant forms.

Dorinda is uncommon as a baby girl name. At the modest height of its usage in 1944, 0.011% of baby girls were named Dorinda. It had a ranking of #608 then. The baby name has dropped out of favor since then, and is currently of only sporadic use. In 2018, within the family of girl names directly related to Dorinda, Dorothy was the most regularly used.

Baby names that sound like Dorinda include Darnete and Darnette. 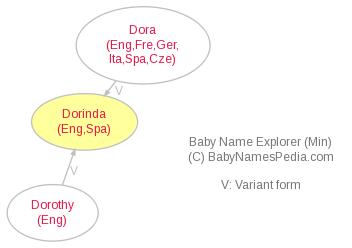