What does Doris mean?

Doris' language of origin is Old Greek. It is predominantly used in English, German, and Greek. The name Doris means 'bountiful; of the Dorian tribe; from Doris; gift'. It is from doris which means 'bountiful' ; doron 'gift'. The name could be derived from the Greek element doris, or else it could be from the name of an ancient Greek tribe, the Dorians, who lived in a region in central Greece called Doris. In Greek mythology, the name was borne by a minor goddess of the sea who was married to Nereus; their fifty daughters were sea nymphs known as the Nereids. The name was taken up by English speakers in the late 19th century. In the UK, the name is known from the fictional Doris Archer in BBC's long-running radio soap opera, The Archers (1950-), while in the USA, the fame of the actress Doris Day (1924-) has contributed to the popularity of the name. Doris is the feminine version of the English, French, and German Dorian.

Doris is primarily used in the English language and it is also of English origin. The name is sometimes treated as a combination of Dorothy and Phyllis.

See also the related forms, the English Dorothy and the English, German, and Greek Phyllis.

Doris is uncommon as a baby girl name. At the height of its usage in 1929, 1.425% of baby girls were given the name Doris. It had a ranking of #6 then. The baby name has substantially fallen in popularity since then, and is now used on an infrequent scale. Within all girl names in its family, Doris was nonetheless the most popular in 2018. 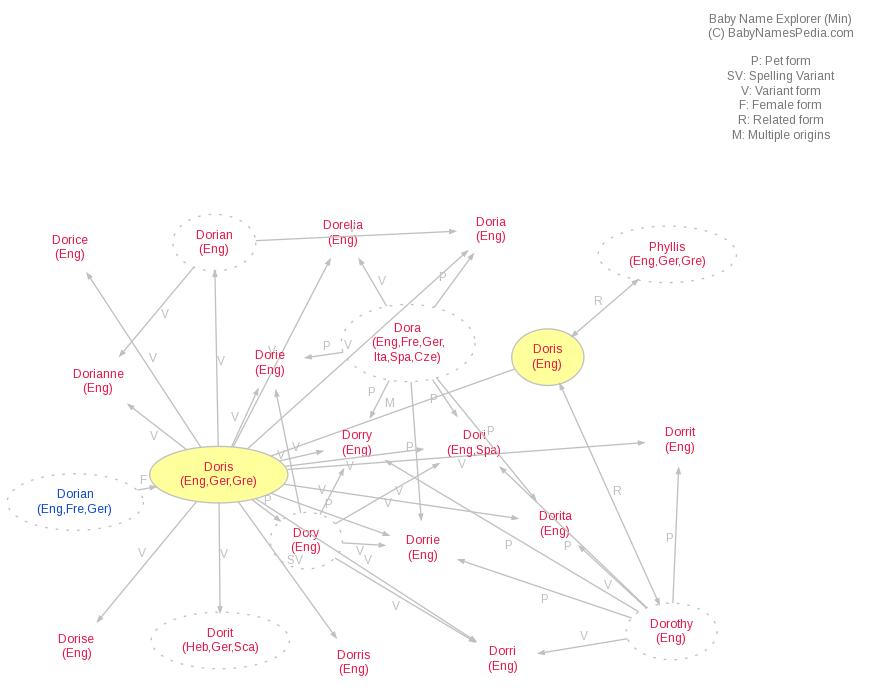