What does Dorothy mean?

[ 3 syll. do-rot-hy, dor-o-thy ] The baby girl name Dorothy is pronounced DAOERah-DHiy- †. Dorothy is of Old Greek origin and it is used mainly in English. The meaning of Dorothy is 'gift of god'. It is a biblical name derived from doron which means 'gift' ; theos 'god'.

The name was borne by two early Christian saints, notably the 4th-century virgin martyr Saint Dorothea of Caesarea. The names Dorothy and Dorothea were adopted by English speakers in the 16th century, and by the late 19th century, Dorothy has eclipsed the older Latinate form. Its popularity dipped in the 20th century, after it was associated as a slang for a homosexual, in reference to the character Dorothy in the notable film adaptation Wizard of Oz (1939); the film has remained a cult status among gays till today, as has the actress Judy Garland, who portrayed Dorothy in the movie. In literature, the name has been made known by the fictional Dorothea Brooke in George Eliot's novel Middlemarch (1871-1872), while the form Dorrit has been made famous by Charles Dickens' serial novel Little Dorrit (1855-1857). In Scotland, Dorothy is used as an Anglicization of the Gaelic Diorbhail. Dorothy is the feminine version of the English, German, and Greek Dorotheus.

What are the Variant Forms of Dorothy?

See also the related forms, the English Doris and the English, German, and Greek Theodora.

Dorothy is an all-time favorite. Today it is still rather popular as a baby girl name, but to a lesser degree than it was before, and it is also perceived as rather trendy. At the peak of its usage in 1923, 3.115% of baby girls were named Dorothy. It was #2 in rank then. The baby name has suffered a marked decline in frequency since then. In 2018, it ranked at #586 with a usage of 0.028%, having regained some lost ground in the recent decade. Out of the family of girl names directly related to Dorothy, Thea was the most regularly used. The name was twice as popular as Dorothy in 2018. Dorothy has primarily been a baby girl name, although in the last century it has also been used for boys. In 1945, 235 times more baby girls than boys were given the name Dorothy. 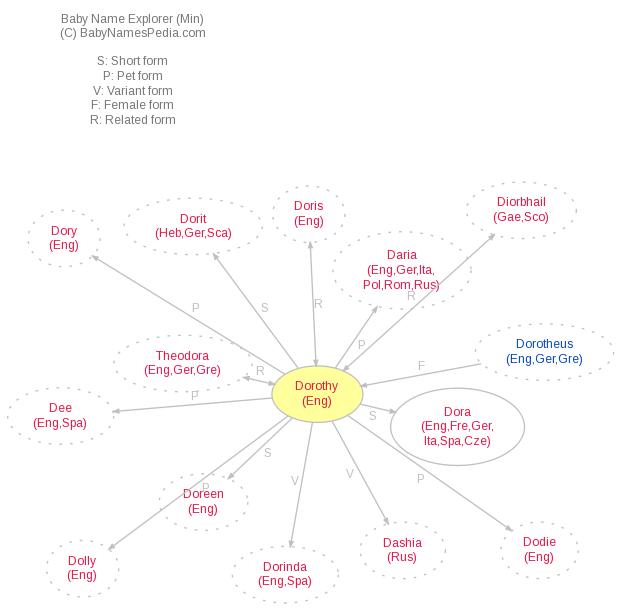