What does Doyle mean?

[ 1 syll. doy-le, do-yle ] The baby boy name Doyle is pronounced D-oyL †. Doyle has its origins in the Celtic language. It is used largely in English and Irish. The meaning of Doyle is 'descendant of Dubhghall, descendant of the dark stranger'. The first name is from the Gaelic surname Ó Dubhghaill meaning 'descendant of Dubhghall'; Dubhghall is an old form of Dougal derived from the elements dubh (meaning 'dark, black') and gall. Doyle can also be taken as a form of Dougal.

Doyle is a derivative (English and Irish) of the English, Irish, and Scottish Dougal.

Doyle is rare as a baby boy name. At the modest peak of its usage in 1931, 0.063% of baby boys were named Doyle. It was #195 in rank then. The baby name has dropped out of favor since then, and is currently of only sporadic use. Out of all boy names in its family, Doyle was nevertheless the most widely used in 2018. 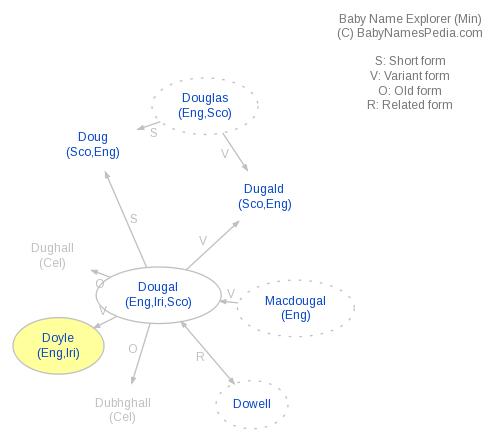