What does Drusilla mean?

[ 3 syll. dru-sil-la, dr-usi-lla ] The baby girl name Drusilla is pronounced DRuw-SIHL-ah in English †. Drusilla's origin is Latin, and its use, English. Drusilla's meaning is 'fruitful, dewy-eyed'. It is a biblical name from the element drosos with the meaning 'dew'. The first name is derived from the Roman imperial family name Drusus (Latin). In Roman tradition, Drusus was first adopted as a nickname by a man named Livius, who killed a Gaulish captain named Drausus (Latin), and thereafter adopted the name according to the prevailing custom. The feminine name was borne by the notorious Livia Drusilla (58BC-29AD), sister of the Roman emperor Caligula. In the Bible, the name was borne by the Jewish wife of the Roman Felix, who was a Christian convert of Paul. The name was consequently adopted by English Puritans in the 17th century. In literature, it is borne by the fictional Aunt Drusilla in Thomas Hardy's last novel Jude the Obscure (1895).

Drusilla is uncommon as a baby name for girls. At the modest height of its usage in 1910, 0.006% of baby girls were named Drusilla. It ranked at #847 then. The baby name has since dropped in popularity, and is of only infrequent use today. Within all girl names in its group, Drusilla was nevertheless the most popular in 2018. 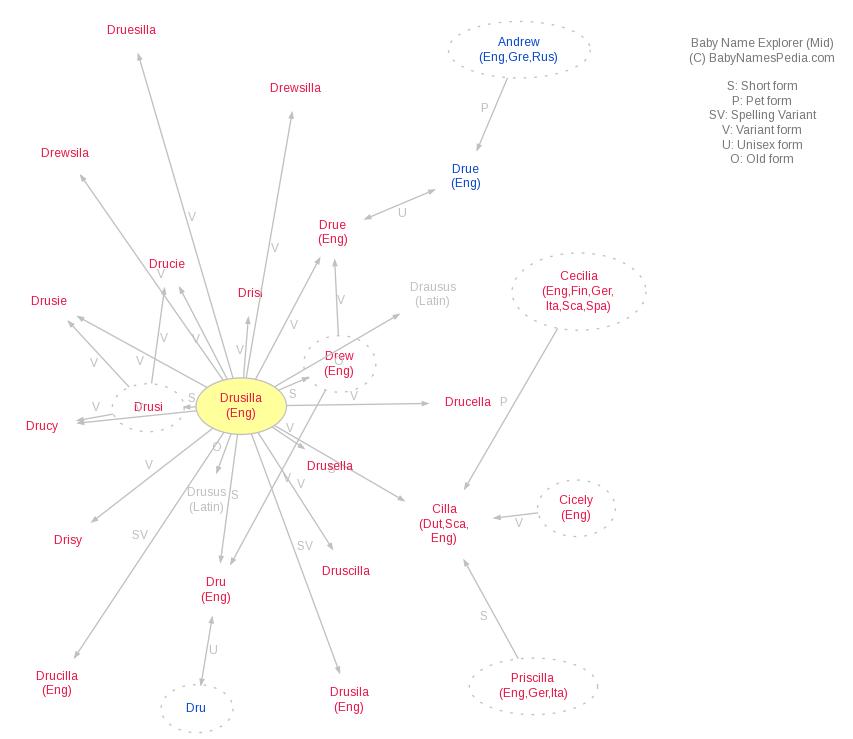