What does Duane mean?

[ syll. dua-ne, du-ane ] The baby boy name Duane is also used as a girl name, but the use for boys is much more common. Its pronunciation is DW-N †.

Duane is used predominantly in the English and Irish languages, and its origin is Celtic. The name is of the meaning little dark one, descendant of Dubhán, descendant of the little dark one. The name is Anglicized from the Gaelic Dubhán, itself originally a byname formed from the element 'dubh' (meaning dark, black) and a diminutive suffix. In modern times, it may be taken as a derivative from the surname Ó Dubháin meaning 'descendant of Dubhán'. The name has been promoted by the fame of the guitarist and singer Duane Eddy (1938-) and thus it has acquired associations with the rock and roll era. The name Duana (English) is the female version of Duane.

Duane has 17 variants that are used in English and other languages. Variants used in English include Dawayne, Deune, Dewain, Dewayne, Duain, Duaine, Duana, Duante, Duayne, Duwain, Duwaine, Duwayne, and Dwaine. The variant spellings Dwain, Dwane (also used in Irish), and Dwayne (also used in Irish) are other English forms. A variant of Duane in other languages is Dubhán (Irish).

Duane's origin is Celtic. It is from the elements 'du' meaning to do ; 'ane' one. The name can be derived from the Scottish dialetical verb 'du' and the Anglo-Saxon adverb 'ane'. The meaning 'to do one' can be translated as 'to do (one) to wit', with 'wit' meaning 'to perceive'. The translated meaning is subsequently 'to cause one to perceive'.

Duane is unusual as a baby name for boys. Its usage peaked in 1933 with 0.173% of baby boys being given the name Duane. Its ranking then was #102. The baby name has since fallen out of favor, and is today of very modest use. Among the group of boy names directly linked to Duane, Dwayne was the most frequently used in 2018. 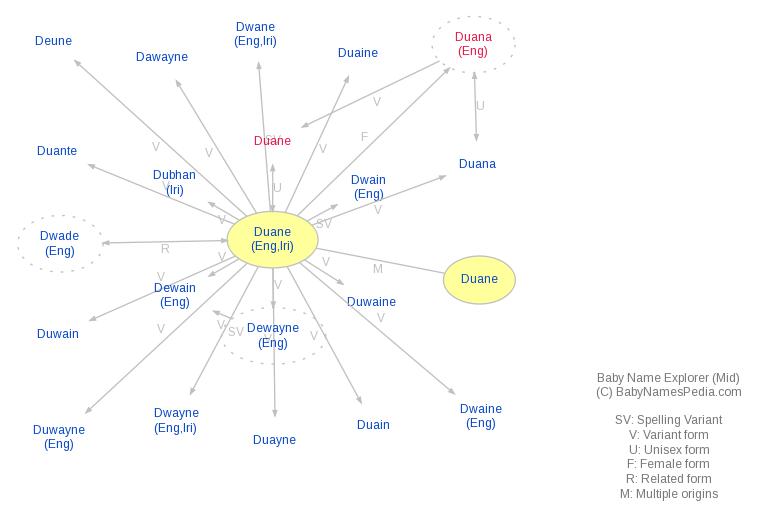