What does Dudley mean?

[ 2 syll. du-dley, dud-l-ey ] The baby boy name Dudley is pronounced as DAHDLiy- †. Dudley is used predominantly in English and its origin is Old English. It is from the element 'leah' which is of the meaning wood, clearing, meadow. The first name is derived from the surname, which is itself from the name of the town in West Midlands, England. The place name is of the meaning 'Dudda's clearing'. Dudda could be an Old English name meaning 'short and stout', or else it could refer to the 8th-century Saxon lord Dud or Dado who supposedly built the Dudley Castle located in the town.

The surname later became an English aristocratic title. Robert Dudley, Earl of Leicester (1532-1588), was the favorite of Queen Elizabeth I, and he came close to marrying the queen. Thomas Dudley (1576-1653), thought to be a scion of the noble Dudley family, emigrated to Massachusetts and became a prominent governor; his surname has been adopted by his many descendants as a first name. In literature, the name is borne by Dudley Dursley in J. K. Rowling's Harry Potter series (1997-2007). The name can be used as an Anglicized form of Dara, Duald, and Dubhdara.

Dudley is unusual as a baby name for boys. Its usage peaked in 1907 with 0.029% of baby boys being named Dudley. It ranked at #314 then. The baby name has since substantially slipped in popularity, and is currently of very modest use. Among all boy names in its group, Dudley was nevertheless the most popular in 2018. 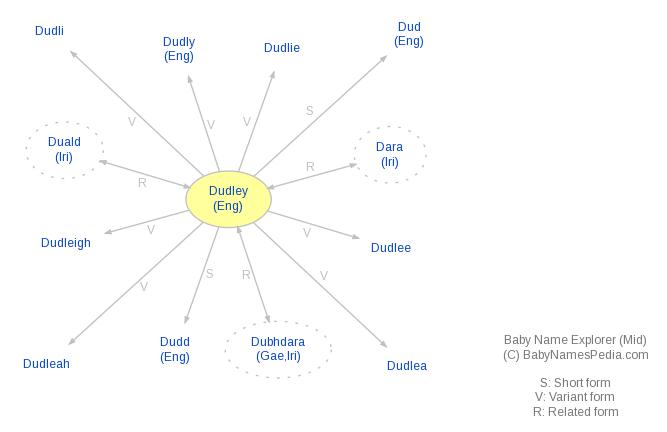