What does Dulcie mean?

[ 2 syll. dul-cie, du-lc-ie ] The baby girl name Dulcie is pronounced as DUWLSiy- †. Dulcie is used mostly in English and its language of origin is Latin. It is derived from the element 'dulcis' with the meaning sweet. An old form of the name is Dulcia (Latin). The name was first used by English speakers in medieval times as the forms Dowse and Duce; the modern form of the name enjoyed a revival in the late 19th century.

Another form of the name is the English spelling variant Dulcy.

Dulcie is rare as a baby name for girls. At the peak of its usage in 1905, 0.006% of baby girls were named Dulcie. Its ranking then was #828. The baby name has since experienced a fall in frequency, and is currently used on a very modest scale. Out of the group of girl names directly related to Dulcie, Dulce was the most popular in 2018. 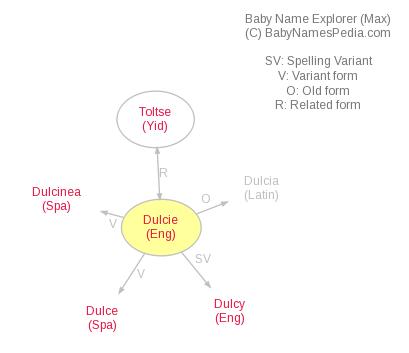