What does Duncan mean?

[ 2 syll. dun-can, du-nc-an ] The baby boy name Duncan is pronounced DAHN-KahN in English †. Duncan's language of origin is Celtic, and it is used largely in the English and Scottish languages. The name's meaning is 'brown warrior; brown head'. The name is Anglicized from the Gaelic Donagh (Old Irish) and Donnchadh (Old Irish), of the elements donn and cath (meaning 'warrior, battle'). From the form Duncanus (Latinized), the name has sometimes been confused with and subsequently taken to contain the second element ceann. The name was borne by a 7th-century Scottish saint and a 10th-century Irish saint. Three 11th-century Scottish kings also bore the name, notably King Duncan I (Donnchadh mac Crìonain, -1040) who was slain by Macbeth and had his story retold in Shakespeare's tragedy, Macbeth (1603-1606). The name has traditionally been popular in Scotland, but it has also been generally adopted by the English speaker since the 20th century.

Duncan is an all-time favorite. Currently it is still somewhat popular as a baby name for boys, though to a lesser extent than it was previously. The name's popularity rose from the 1900s up to the 1990s. At the modest height of its usage in 1997, 0.032% of baby boys were given the name Duncan. It ranked at #377 then. The baby name has since fallen in popularity. In 2018, it ranked at #917 with a usage of 0.012%, but it was nonetheless the most commonly used within all boy names in its group. 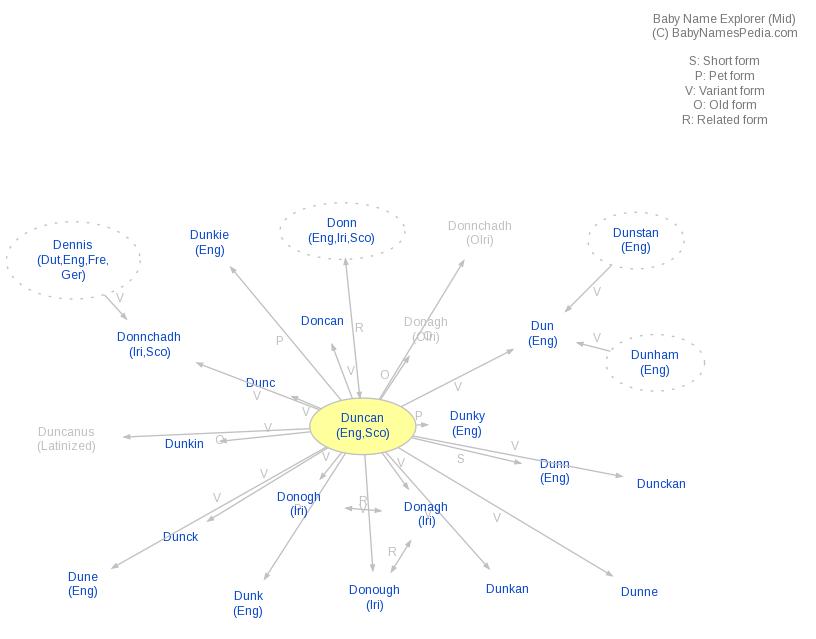