What does Dustin mean?

[ 2 syll. dus-tin, du-st-in ] The baby boy name Dustin is also used as a girl name, but the use for boys is much more common. Its pronunciation is DAHST-ahN †. Dustin is used chiefly in the English and German languages, and its origin is Old Norse. It is from the elements 'thor' meaning thunder, thunder god ; 'steinn' stone. The first name is derived from the English surname, which is of obscure origin. The surname could have developed as a Norman equivalent of the personal name Dórsteinn (Old Norse) meaning 'Thor's stone'. The popularity of the name has been boosted by the famous US actor Dustin Hoffman (1937-) who was apparently named after the less famous US silent film actor Dustin Farman (1874-1929). The name Dusty (English) is the female form of Dustin.

Dustin is a fairly popular baby name for boys. The name's popularity rose from the 1960s up to the 1980s; before that, it was of infrequent use only. At the height of its usage in 1984, 0.555% of baby boys were given the name Dustin. It ranked at #41 then. The baby name has since experienced a steep loss in popularity. In 2018, its usage was 0.028% and its ranking #525, but it was nonetheless the most popular within all boy names in its group. In the past century Dustin has mostly been a baby boy name. 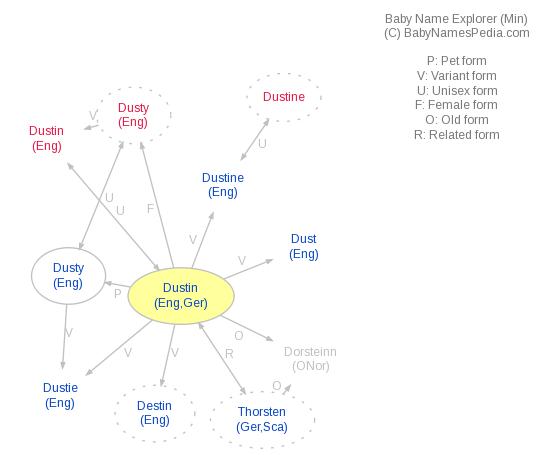