What does Dylan mean?

[ 2 syll. dy-lan, dyl-an ] The baby boy name Dylan is sometimes used as a girl name. Its pronunciation is DIHL-ahN in English or DAHL-aeN in Welsh †. Dylan is used predominantly in the English, German, and Welsh languages, and its origin is Welsh. The name is of the meaning sea. It is derived from the elements 'dylif' meaning flood ; 'dy' great ; 'llanw' flow, tide. In Welsh mythology and the Mabinogi, Dylan Eli Ton ('Son of the Wave') was the god of the sea, the son of Aranrhod, and the twin of Lleu Llaw Gyffes. The name has been popularized by the Welsh poet Dylan Thomas (1914-1953), and in modern times by the US folk singer Bob Dylan (1941-). The singer, generally known as Dylan, adopted the poet's surname as his stage name after being inspired by the Marshal Matt Dillon character in the popular TV western series Gunsmoke (1955-1975). In the late 20th century, the name was further publicized as the name of the lead character Dylan McKay portrayed by Luke Perry in the prime time TV series Beverly Hills, 90210 (1990-2000). The name Dilyn (English) is the female version of Dylan.

Dylan is a very popular baby name for boys. The name's popularity jumped from the 1960s up to the 2000s; before that, it was of infrequent use only. At the height of its usage in 2001, 0.798% of baby boys were given the name Dylan. Its ranking then was #21. The baby name has since declined in popularity. In 2018, its usage was 0.443% and its ranking #31, but it was nonetheless the most popular within all boy names in its group. In 2018, Dylan was used 19 times more than the subsequent ranked name, Dillon. In the past century Dylan has predominantly been a baby boy name. In 2017, baby boys named Dylan outnumbered girls by 10 times. 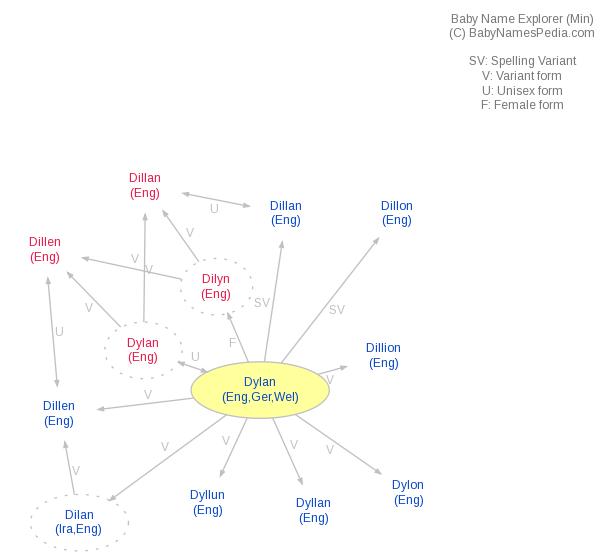