What does Earl mean?

[ 1 syll. ea-(r)(l), ear-l ] The baby boy name Earl is pronounced as er-L †. Earl is used predominantly in the English language and it is derived from Old English origins. It is from the elements 'earl' ; 'eorl' meaning nobleman, warrior. The first name is derived from the English word for the aristocratic title and ultimately the Old English 'eorl' (meaning nobleman, warrior). It was originally used as a byname or surname for someone working in the household of an English earl; this practice dated from the 12th century. The first name grew wider in use by the 17th century, and in the 20th century it was common with Afro-Americans. The name Earline (English) is the female version of Earl.

Earl is an uncommon baby name for boys. At the height of its usage in 1901, 0.708% of baby boys were given the name Earl. It ranked at #23 then. The baby name has since fallen from favor, and is currently of irregular use. Within all boy names in its group, Earl was nonetheless the most popular in 2018. The name Earl has been mostly given to baby boys, though it has also been used as a girl name in the past century. In 1931, the name Earl was given to 94 times as many baby boys than girls. 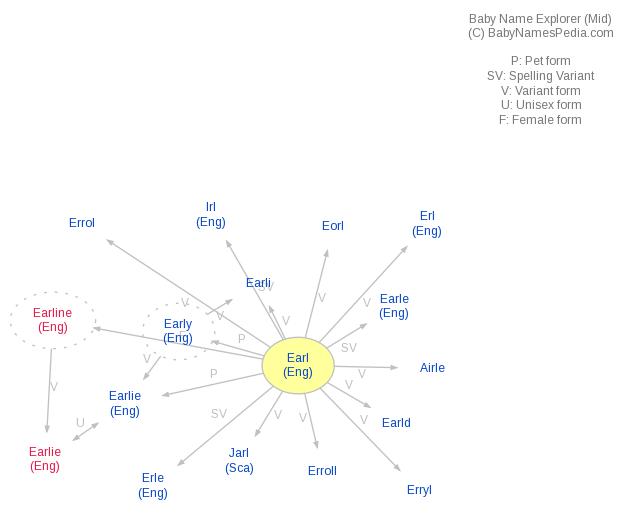