What does Ebenezer mean?

[ 4 syll. e-be-ne-zer, eb-enez-er ] The baby boy name Ebenezer is also used as a girl name. It is pronounced in English as ehB-ah-NIY-ZahR †. Ebenezer is used predominantly in the English language and its origin is Hebrew. A biblical name, it is from the elements 'eben' meaning stone ; 'ezer' help ; 'ebenhaezer' stone of help. The first name is derived from a place name in the Bible. Ebenhaezer was the place where the prophet Samuel erected a memorial stone, calling it the same name, to celebrate the Israelites' victory over the Philistines; his words were 'hitherto hath the Lord helped us'. The name was consequently adopted by English Puritans in the 17th century, possibly in reference to the prophet's words. Subsequently, the appearance of the bitter and miserly character Ebenezer Scrooge in the Charles Dickens novella A Christmas Carol (1843) may have reduced the popularity of the name.

Ebenezer has 15 variants. Variants include Ebbaneza, Ebbea, Ebbee, Ebbey, Ebbi, Ebby, Ebeneser, Ebenezar, Ebenzer, Eveneser, and Evenezer. The contractions Eb and Eben (used in Welsh too), the diminutive form Ebbie, and the variant spelling Ebeneezer are other English forms.

Ebenezer is not regularly used as a baby name for boys. It is not listed in the top 1000 names.

A baby name that sounds like Ebenezer is the name Ebeneezer (English). 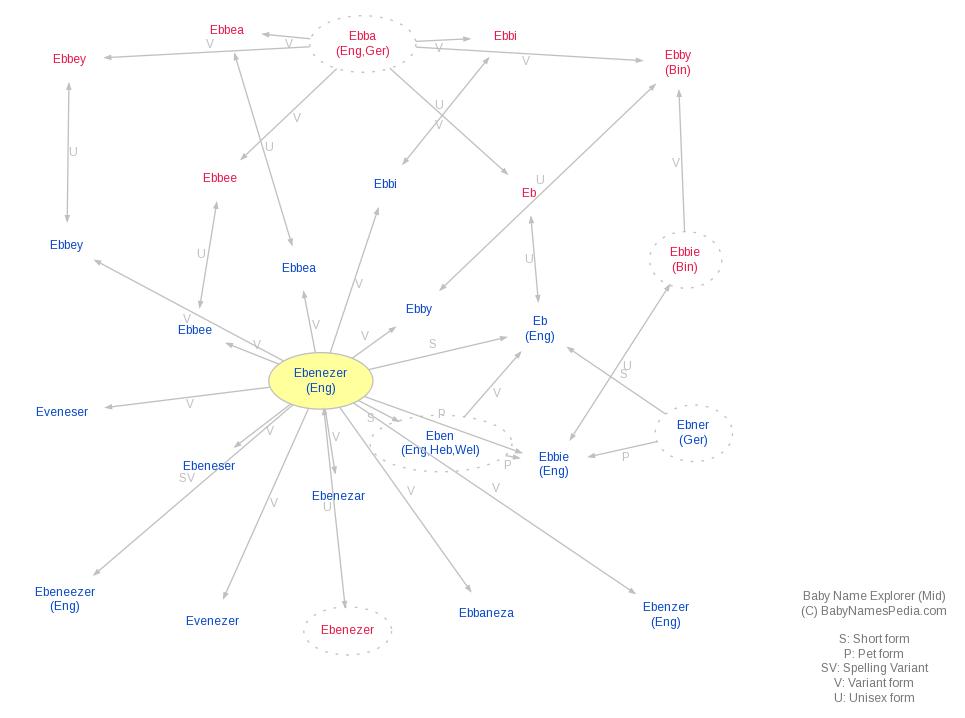