What does Eden mean?

[ 2 syll. e-den, ed-en ] The baby girl name Eden is also used, though less often, as a boy name. It is pronounced in English as IY-DahN †.

Eden is of Hebrew origin. It is used mainly in English and Hebrew. In the Bible, the Garden of Eden was the paradise where Adam and Eve lived; the place name is itself of the Hebrew eden (meaning 'delight, paradise'), or else the Assyrian edinu ('plain, steppe') which is from the Sumerian edin. The first name was adopted by English Puritans in the 17th century as a result of the biblical association. The biblical place name continues to be the usual source of inspiration for the adoption of the first name in modern times, although the first name could also be of Old English origin.

Eden's origin is Old English, and its use, English. Here, the meaning is 'blessed bear cub'. It is from ead meaning 'wealth, blessed' ; hun 'young animal, bear cub, Hun, warrior'. The first name is derived from the surname, which is itself from the medieval personal names Edun (Old English) or Edon (Old English). This was the usual source for English speakers adopting the first name before the 17th century, although usage had no doubt been encouraged by association with the biblical place name.

Eden is a popular baby girl name, and it is also regarded as rather trendy. The name has been increasing in popularity since the 1980s; prior to that, it was of only sporadic use. At the modest height of its usage in 2017, 0.111% of baby girls were named Eden. It had a ranking of #139 then. In 2018, it ranked at #146 with a usage of 0.103%, and it was the most regularly used within all girl names in its family. 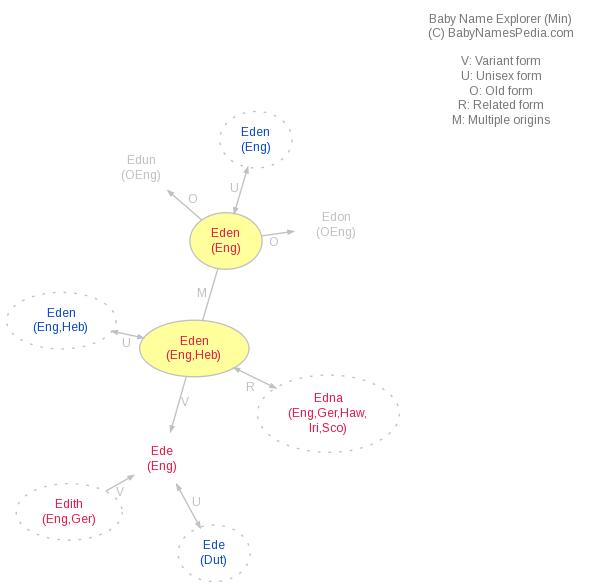