What does Edgar mean?

[ 2 syll. ed-gar, edg-ar ] The baby boy name Edgar is pronounced in English as EHD-GahR or in French as ehD-GAER †. Edgar is largely used in the English, French, German, and Polish languages, and its origin is Old English. The name is of the meaning wealthy spear, owner of many spears. A two-element name, it is derived from the elements 'ead' meaning wealth, blessed ; 'gar' spear. Eadgar (Old English) is an original form of Edgar. The name was used among medieval English speakers in its current form. It was borne by the 10th-century king Edgar the Peaceful (-975) and the 11th-century prince Edgar Atheling (1060-1125). The name survived the Norman Conquest but it soon lost favor in the Middle Ages, save for its appearance as the name of the virtuous brother in Shakespeare's tragedy King Lear (1603-1606), as the play is set in an earlier English period. It saw a revival in the early 19th century, promoted by the appearance of a character bearing the name in Sir Walter Scott's novel The Bride of Lammermoor (1819) and by the fictional Edgar Linton in Emily Brontë's novel Wuthering Heights (1847). In the USA, one of the earliest American novelists Charles Brockden Brown published his novel Edgar Huntly (1799) and made the name well-known among Americans. The name Edgarda (Italian) is the female equivalent of Edgar.

The name Edgar is used to a great extent; it has 34 variants that are used in English and other languages. Variants used in English include Eadgar, Eadgard, Eadger, Eadgir, Eadgor, Eadgur, Eadgyr, Edgardo (also used in Italian and Spanish), Edgerrin, Edghur, Edgir, Edgor, Edgur, Edgyr, and Medgar (also used in German). Other English variants include the contractions Ed, Ned, and Ted, and the pet forms Eddie, Eddy, Neddie, Neddy, Teddie, and Teddy.

Edgar is a classic favorite. Currently it is still fairly popular as a baby name for boys, though it was in more widespread use in the past. Its usage peaked modestly in 1901 with 0.234% of baby boys being given the name Edgar. Its ranking then was #71. The baby name has since experienced a loss in popularity, and in recent years it is of occasional use. In 2018, its usage was only 0.048% and its ranking #356, but it was nonetheless the most popular among all boy names in its group. In 2018, Edgar was thrice as popular as the subsequent ranked name, Eddie.

Baby names that sound like Edgar include Edger, Edgaro, Edzard, and Edgor. 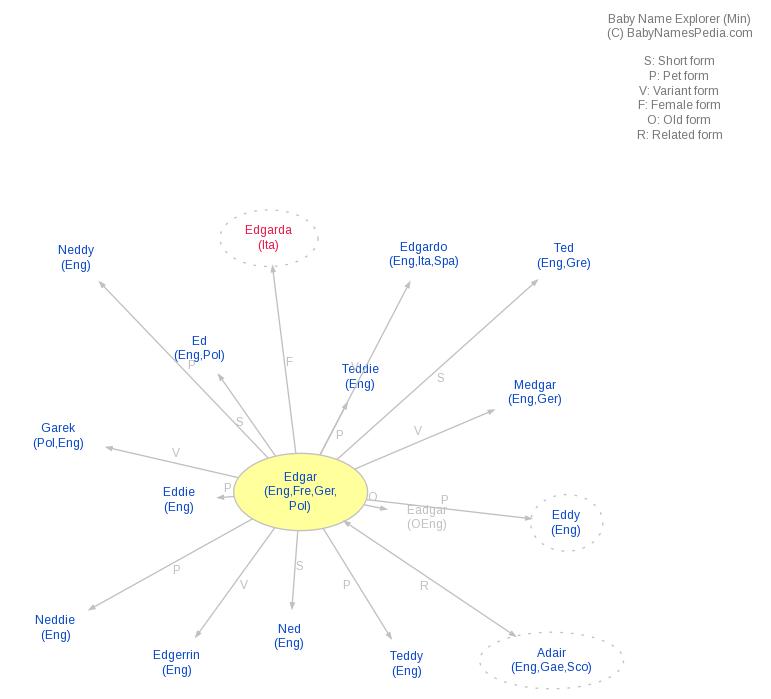