What does Edith mean?

[ 2 syll. e-dit(h), ed-i-th ] The baby girl name Edith is pronounced IY-Dih-TH in English or EH-DihT in German †. Edith's origin is Old English, and its use, English and German. The meaning of the name is 'rich in war'. It is derived from ead + gyth which mean 'wealth, blessed' + 'fight, battle' respectively. Eadgyth (Old English) and Otgunde (Germanic) are older forms of Edith. Edith was an Old English two-element name in use before the Norman Conquest. The name was popular among medieval English speakers, promoted by the fame of Saint Edith of Wilton (961-984), daughter of the English king Edgar the Peaceful. Her name bore the same element ead (meaning 'wealth, blessed') as was consistent with the family naming practice then. The name dropped off in use after the Middle Ages but saw a revival in the late 19th century when Saxon names were popular.

Edith is an all-time favorite. Today it is still rather popular as a baby girl name, but not to the degree it was previously. At the height of its usage in 1901, 0.733% of baby girls were given the name Edith. It was #32 in rank then. The baby name has seen a marked decline in popularity since then, and in recent years it is of only modest use. In 2018, it ranked at #518 with a usage of 0.032%, but it was nonetheless the most popular within all girl names in its family. Edith has primarily been a girl name, although in the last century it has also been used for boys. In 1910, 92 times as many girls than boys were given the name Edith. 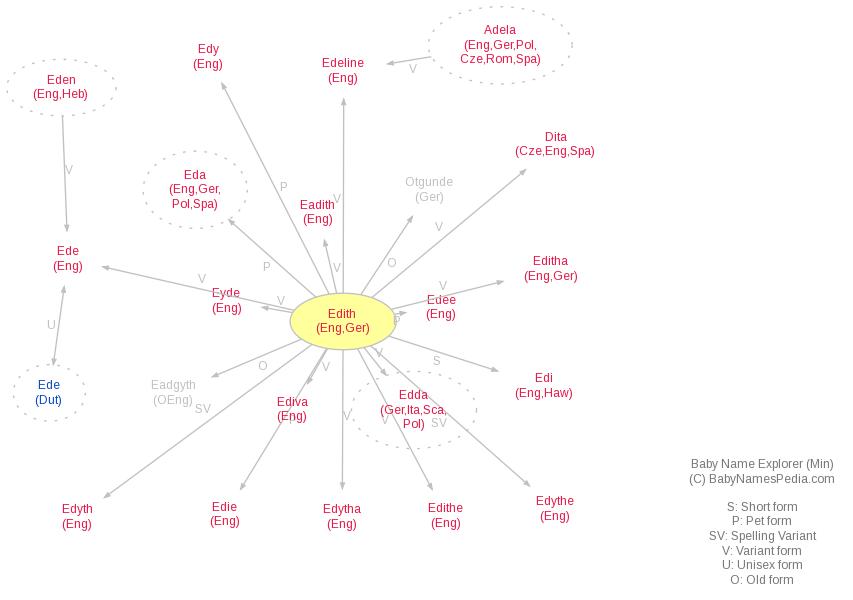