What does Edmund mean?

[ 2 syll. e-dmun(d), ed-mu-nd ] The baby boy name Edmund is pronounced as EHD-MahND in English or EHD-MuhNT in German and Polish †. Edmund is largely used in the English, German, and Polish languages, and its origin is Old English. The name's meaning is wealthy guard, protector of wealth. A two-element name, it is derived from the elements 'ead' meaning wealth, blessed ; 'mund' protection, protector. Eadmund (Old English) is an older form of Edmund. The name was borne by various early saints and members of royalty, notably Edmund the Martyr (841-869), the King of East Anglia who was killed by pagan Vikings for his faith. He was buried at Bury St Edmunds in Suffolk, which was named after him. Many subsequent miracles there were ascribed to him, and his cult following promoted the adoption of the name throughout Europe. The name was also borne by Edmund Ironside (988-1016), the English King who got his surname for his valiant defense against the invading Vikings led by King Canute. The name remained in use in its current form by medieval English speakers after the Norman Conquest, before experiencing a dip in popularity in the 15th century. In literature, it is borne by the illegitimate son of the Duke of Gloucester who usurps his brother Edgar's birthright in the Shakespeare tragedy King Lear (1603-1606). The name Edmonda (Italian) is the female equivalent of Edmund.

Edmund is uncommon as a baby name for boys. At the height of its usage in 1914, 0.116% of baby boys were given the name Edmund. It ranked at #130 then. The baby name has since dropped out of favor, and is now of very modest use. In 2018, within the group of boy names directly linked to Edmund, Eddie was the most frequently used.

Baby names that sound like Edmund include Edmand, Edmond, Edmwnd, Edmondo, and Edmundo. 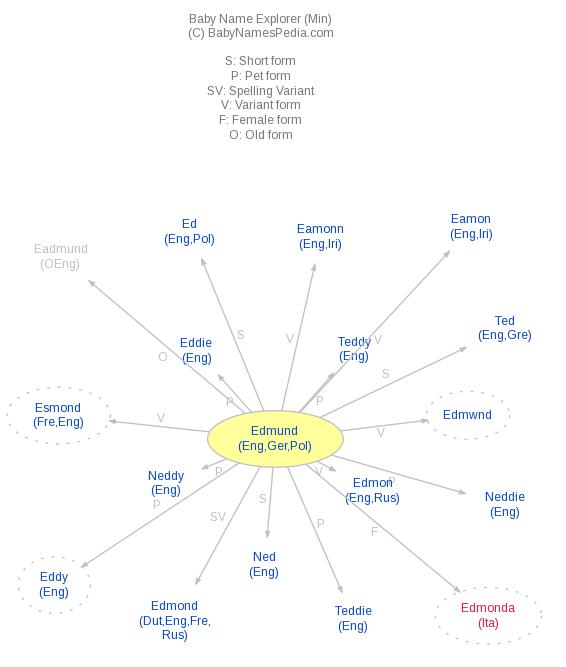