What does Eileen mean?

[ 3 syll. ei-lee(n), eil-e-en ] The baby girl name Eileen is pronounced as -ay-LIYIYN †. Eileen is used mostly in the English, Irish, and Gaelic languages. Its language of origin is Old French and Old Greek. Old French origin, English and Irish use: It is derived from the words 'aveline' meaning hazelnut ; 'avis' bird. The name is Anglicized from the Gaelic name Aibhilin (Old Irish) or Eibhlín, from the omitted pronunciation of the Gaelic '-bh-'; in another pronunciation of '-bh-' as 'v' comes the name Evelyn. The Gaelic names are themselves from Aveline (Old French). Aveline is of uncertain origin; it could be from the Old French word for 'hazelnut', or the word 'avis', or it could be ultimately from a diminutive of Ava. The name Eileen was adopted by English speakers in the late 19th century through the influence of Irish migrants.

Eileen is a derivative (Gaelic) of the English name Evelyn.

Eileen is also a derivative (Irish) of the English name Helen.

What are the Variant Forms of Eileen?

Eileen is a classic favorite. Today it is still rather popular as a baby girl name, but not as much as it was previously. At the height of its usage in 1943, 0.285% of baby girls were given the name Eileen. It was #68 in rank then. The baby name has markedly fallen in popularity since then, and it is of modest use in recent years. In 2018, its usage was only 0.024% and its ranking #671. Within the family of girl names directly linked to Eileen, Evelyn was the most widely used. In 2018, it was 24 times more widely used than Eileen. 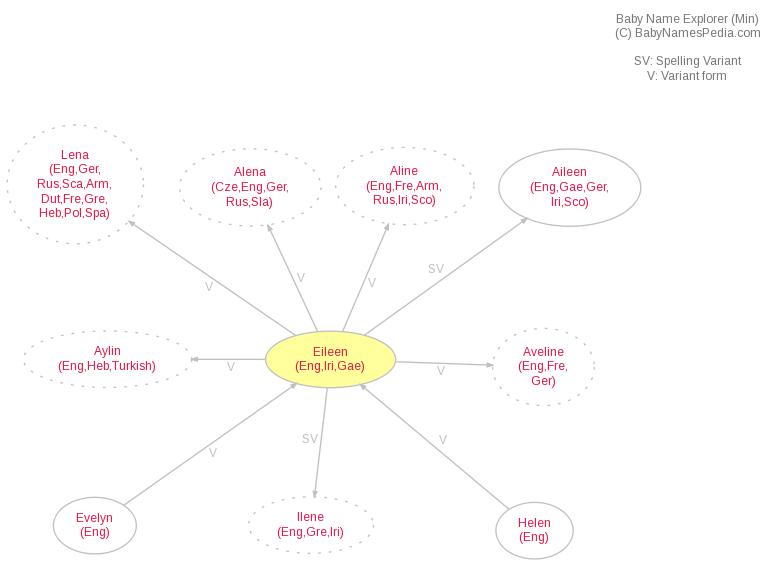