What does Einar mean?

[ 2 syll. ei-nar, ein-ar ] The baby boy name Einar is pronounced in and Norwegian as -AY-Naa-R or in Icelandic as EY-NaaR †. Einar is primarily used in English, German, and Scandinavian, and it is of Old Norse origin. Einar's meaning is lone warrior; army of one. A two-element name, it is derived from the elements 'einn' which means alone, lone ; 'arr' army, warrior. An original form of the name is Einarr (Old Norse). In Nose mythology, the name referred to the spirits of the slain warriors; they were brought by the Valkyries to Valhalla to fight and feast until Ragnarök, when they would join the Norse gods in the final battle. The name was popular in ancient Iceland and Norway.

Einar is unusual as a baby name for boys. Its usage peaked modestly in 1909 with 0.009% of baby boys being named Einar. It ranked at #729 then. The baby name has since slipped in popularity, and is now used on an infrequent scale. Among all boy names in its group, Einar was nevertheless the most regularly used in 2018. 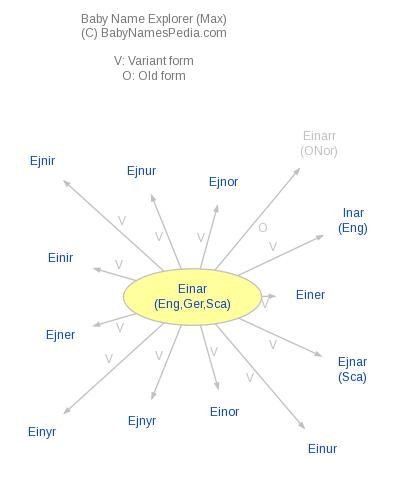