What does Elaine mean?

[ 2 syll. e-lai-ne, el-a-ine ] The baby girl name Elaine is pronounced as eh-LEYN- †. Elaine is primarily used in the English, French, and Welsh languages. It is of Old Provençal and Old Greek origin.

Elaine is a form of the English name Eleanor.

Elaine is also an English, French, and Welsh form of the English name Helen.

Elaine is a classic favorite. Currently it is still rather popular as a baby girl name, but not to the degree it was previously. The name jumped in popularity from the 1900s up to the 1940s; prior to that, it was of modest use only. At the height of its usage in 1945, 0.438% of baby girls were given the name Elaine. It had a ranking of #44 then. The baby name has seen a marked fall in frequency since then. In 2018, its usage was 0.025% and its ranking #634. Within the family of girl names directly linked to Elaine, Eleanor was the most regularly used. In 2018, it was more regularly used than Elaine by 12 times. 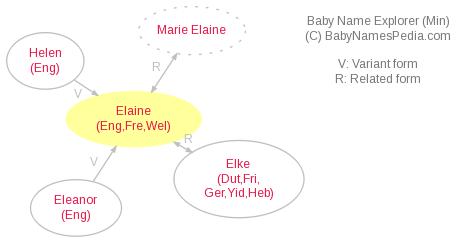