What does Eldon mean?

[ 2 syll. el-don, eld-on ] The baby boy name Eldon is pronounced as EHLDahN †. Eldon is of Old English origin and it is used mainly in English. The name Eldon means 'Ella's hill'. It is from dun which means 'hill, mound, dune' ; aelf 'elf, supernatural being'. The first name is derived from the surname, which is itself from a medieval place name in County Durham, England. The place name refers to the Old English masculine name Ella, a diminutive of a first name with the element aelf (meaning 'elf, supernatural being'). The first name Eldon has been used since the 19th century.

Forms of Eldon include the names Aldon, Eldin, and Eldun.

Another form of the name is the English spelling variant Elden.

Eldon is unusual as a baby boy name. Its usage peaked in 1926 with 0.057% of baby boys being named Eldon. It had a ranking of #210 then. The baby name has fallen out of favor since then, and is used only on a very modest scale now. Among all boy names in its family, Eldon was nevertheless the most widely used in 2018. 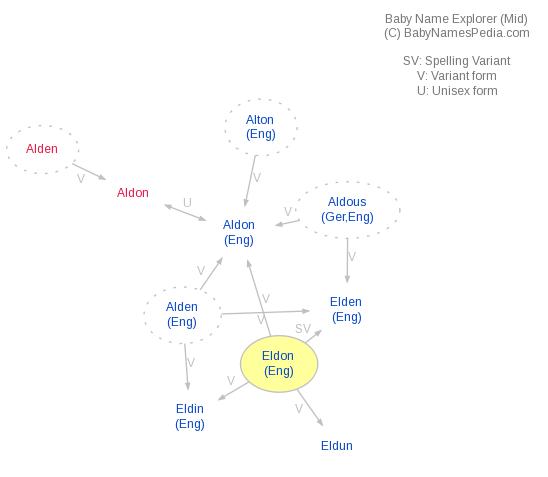