What does Elicio mean?

[ syll. e-li-cio, el-ic-io ] The baby boy name Elicio is pronounced ihLIHSiyow †. Elicio's origin is Latin, and its use, Italian. It is derived literally from the word elicio which is of the meaning 'to entice out, to draw down'. Elicius (Latin) is an older form of the name. In Roman mythology, this was the title of the king of the gods, Jupiter, in reference to how his lightning bolt can be drawn down to Earth.

Elicio is not commonly used as a baby boy name. It is not listed within the top 1000. 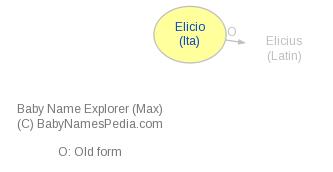