What does Elijah mean?

[ 3 syll. e-li-jah, el-ij-ah ] The baby boy name Elijah is pronounced as ih-LAY-JHah or ih-LAY-ZHah (English) †. Elijah is used predominantly in the English and Hebrew languages, and it is derived from Hebrew origins. The name's meaning is my God is Yahweh. A biblical name, it is derived from the elements 'el' meaning God, powerful ; 'yahweh' name of God. Elias (Latin) and Eliyahu (Hebrew) are old forms of Elijah. The name was borne by an important prophet in the Bible who fought against the prophets of Baal on Mount Carmel; his exploits were recounted in the two Books of Kings in the Old Testament which climaxed with him riding a chariot of fire into heaven. In the New Testament, he was referred to by the Greek or Latin form Elias. Elijah was also used as an alternative name by John the Baptist. As a result of the vivid biblical accounts of the prophet and the subsequent medieval tales about him, the names Elijah and Elias were commonly used in the medieval period. Various early saints bore the name, typically in the form Elias. Both forms of the name were later revived by the English Puritans in the 17th century. In the last few decades, Elijah has been used mainly by Black Muslims in the USA, and more recently, it has been made better known by the actor Elijah Wood (1981-). The name Eliana (Hebrew) is the female version of Elijah.

The name Elijah is used to a great extent; it has 52 variants that are used in English and other languages. Variants used in English include Alijah, El, Eliahu, Elian, Elias (used in Finnish, German, Greek, Hungarian, Portuguese, and Scandinavian too), Elijha, Elijiah, Elijio, Elijuah, Elijuo, Eliot, Eliya, Eliyah, Elja, Eljah, Elliot, Elliott, Ellis, Ely, Elyja, Elyjah, Elyjuah, Elyot, Elyott, Ilie, and Illya. The contraction Eli (used in Hebrew too), and the diminutive form Lige are other English variants. 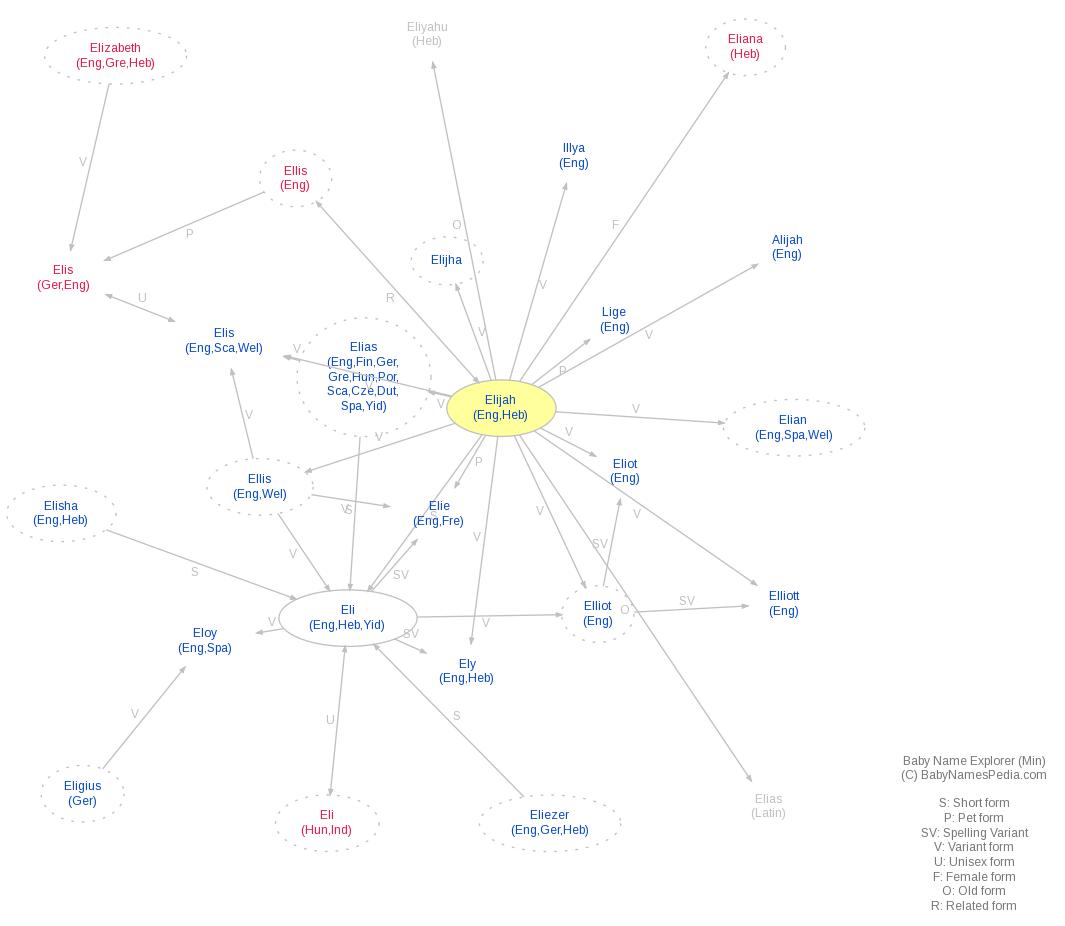