What does Elin mean?

[ 2 syll. e-lin, el-in ] The baby girl name Elin is pronounced as EHL-ahN †. Elin is used chiefly in English, Scandinavian, and Welsh. Its origin is Old French and Old Greek.

Elin is a variant of the name Eileen (English, Irish, and Gaelic).

Elin is also a variant of the name Ellen (Dutch, English, and Scandinavian) in the English language.

Elin is also a variant of the name Helen (English) in the Scandinavian and Welsh languages.

Elin is uncommon as a baby girl name. At the modest height of its usage in 2011, 0.022% of baby girls were named Elin. It was #659 in rank then. The baby name has substantially slipped in popularity since then, and is today of irregular use. In 2018, within the family of girl names directly related to Elin, Helen was the most widely used. 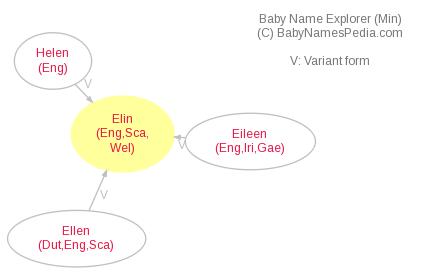