What does Elisha mean?

[ 3 syll. e-lis-ha, el-i-sha ] The baby girl name Elisha is also used as a boy name, and it is more frequently a boy name. It is pronounced in English as ih-LAY-SHah or iy-LAY-SHah †. Elisha's language of origin is Germanic, Sanskrit, Hebrew, and Old Greek. It is predominantly used in English and Hebrew. From Hebrew roots, its meaning is 'God is salvation'. It is a biblical name from el which means 'God, powerful' ; sha 'to help, to deliver'. The feminine name could also be derived from the combination of Elise and Alicia. See Elisha for more information.

In addition, Elisha is a form of Alice in the English language.

Elisha is also a form of the English and Indian Alisha.

Elisha is also a form of the English Elysia.

What are the Variant Forms of Elisha?

Elisha is an unusual baby girl name. Its usage peaked modestly in 1980 with 0.035% of baby girls being named Elisha. It was #373 in rank then. The baby name has steeply dropped in popularity since then, and is of only irregular use today. In 2018, among the family of girl names directly related to Elisha, Alice was the most commonly used. Although there were times from 1970 to 1996 that Elisha was more popular with girls, today it is used more commonly as a boy name. In 1998, 10% more boys than girls were given the name Elisha. 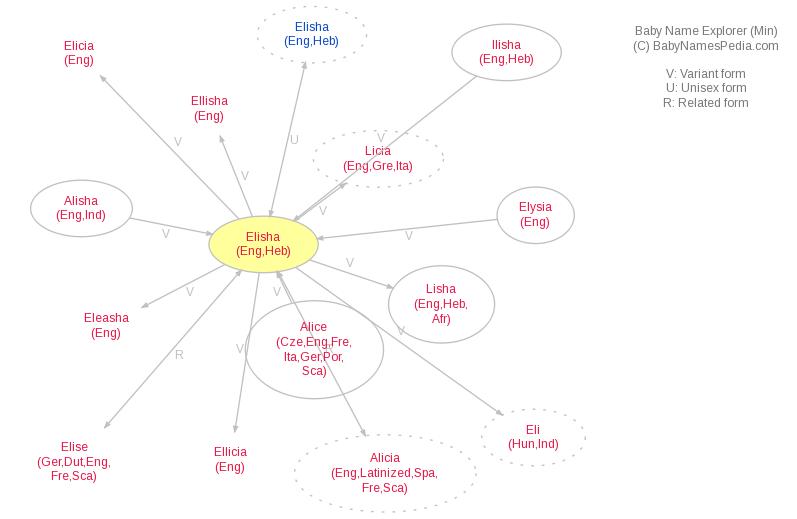