What does Eliza mean?

[ 3 syll. e-li-za, el-iza ] The baby girl name Eliza is pronounced eh-LAYZaa- †. Eliza is of Germanic and Hebrew origin, and it is used mainly in Romanian, English, Hungarian, and Polish. Biblical name: The name first developed as a diminutive of Elizabeth in the 16th century, and its use as an independent name started in the 18th century. It was made famous by the fictional Eliza Doolittle in George Bernard Shaw's play Pygmalion (1913) and the subsequent musical My Fair Lady (1956).

In addition, Eliza is a derivative (Romanian) of Alice.

Eliza is also a shortening (English and Polish) of the English, Greek, and Hebrew Elizabeth.

Eliza has 17 derivatives. Derivatives include Aliza (used in Hebrew too), Alizah, Eliz, Elizah, Elizaida, Elizalina, Elize, Elizea, Elizza, Elliza, Ellyza, Elyza, Elyzza, and Elza. Other English variants include the shortening Liza (used in Hungarian, Russian, and Polish too), and the diminutive forms Liz and Lyza.

Both the origin and meaning of the name Eliza is inherited by all variant forms.

Eliza is popular as a baby name for girls, and it is also perceived to be trendy. The name has been increasing in popularity since the 1970s. At the modest height of its usage in 2018, 0.122% of baby girls were named Eliza. It ranked at #131 then. Within all girl names in its group, Eliza was the 3rd most popular after Elizabeth and Alice in 2018. Elizabeth was used 4 times more than Eliza in that year. 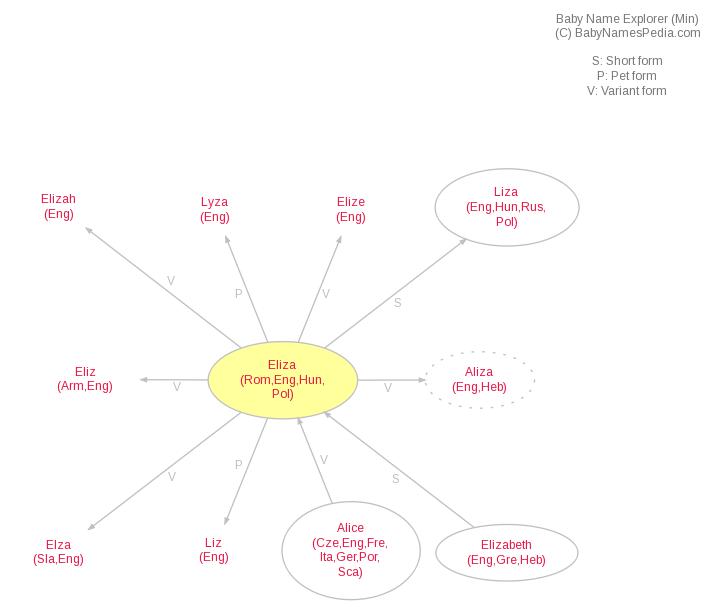