What does Elizabeth mean?

[ 4 syll. e-li-za-bet(h), el-izabe-th ] The baby girl name Elizabeth is also used as a boy name, though it is far more popular for girls. It is pronounced ih-LIHZ-ah-Bah-TH (English) †. Elizabeth has its origins in the Hebrew language. It is used largely in English, Greek, and Hebrew. The meaning of Elizabeth is 'God is perfection, God is my oath'. It is a biblical name from el which means 'God, powerful' ; sheba 'oath, seven'. The name is derived via Elisabet (Old Greek) and Elisabetha (Latin) from Elisheba (Hebrew). The element sheba (meaning 'oath, seven') alludes to perfection, and the number seven is a biblical symbol of God's perfect work of creating the world in seven days. In the Old Testament of the Bible, Elisheba was the wife of Aaron, while in the New Testament, Elisabeth was the mother of John the Baptist and the first to realize that her cousin Mary was to bear Jesus Christ.

As a result of the biblical mention, the name was popular in medieval times. In Eastern Europe, it would sometimes be bestowed in honor of Saint Elisabeth of Hungary (1207-1231), the daughter of King Andrew II who gave her wealth to the poor and became a model of Christian charity. The name became popular in England only in the 16th century during the reign of Queen Elizabeth I (1533-1603), who was named after her grandmother Elizabeth of York, and had the nickname 'Good Queen Bess'. Due to the fame of the queen, the name Elizabeth became more popular than the older form Elisabeth. By the 17th century, one in four baby girls in England were given the name Elizabeth. In the 20th century, the name was again popularized by royal associations when Elizabeth Bowes-Lyon (1900-2002) became the Queen Consort of King George VI, and more so when her daughter became Queen Elizabeth II (1926-).

What are the Variant Forms of Elizabeth?

Elizabeth is very popular as a baby girl name. At the peak of its usage in 1912, 1.454% of baby girls were named Elizabeth. It was #8 in rank then. The baby name has experienced a decline in frequency since then, and is currently used on a modest scale. In 2018, it ranked at #13 with a usage of 0.461%, but it was nevertheless the 2nd most popular after Isabella, out of all girl names in its family. It was 70% more regularly used than Elizabeth in 2018. Elizabeth has primarily been a baby girl name in the last century. In 1989, 154 times more baby girls than boys were given the name Elizabeth.

A baby name that sounds like Elizabeth is the Dutch, English, French, German, Greek, and Scandinavian Elisabeth. 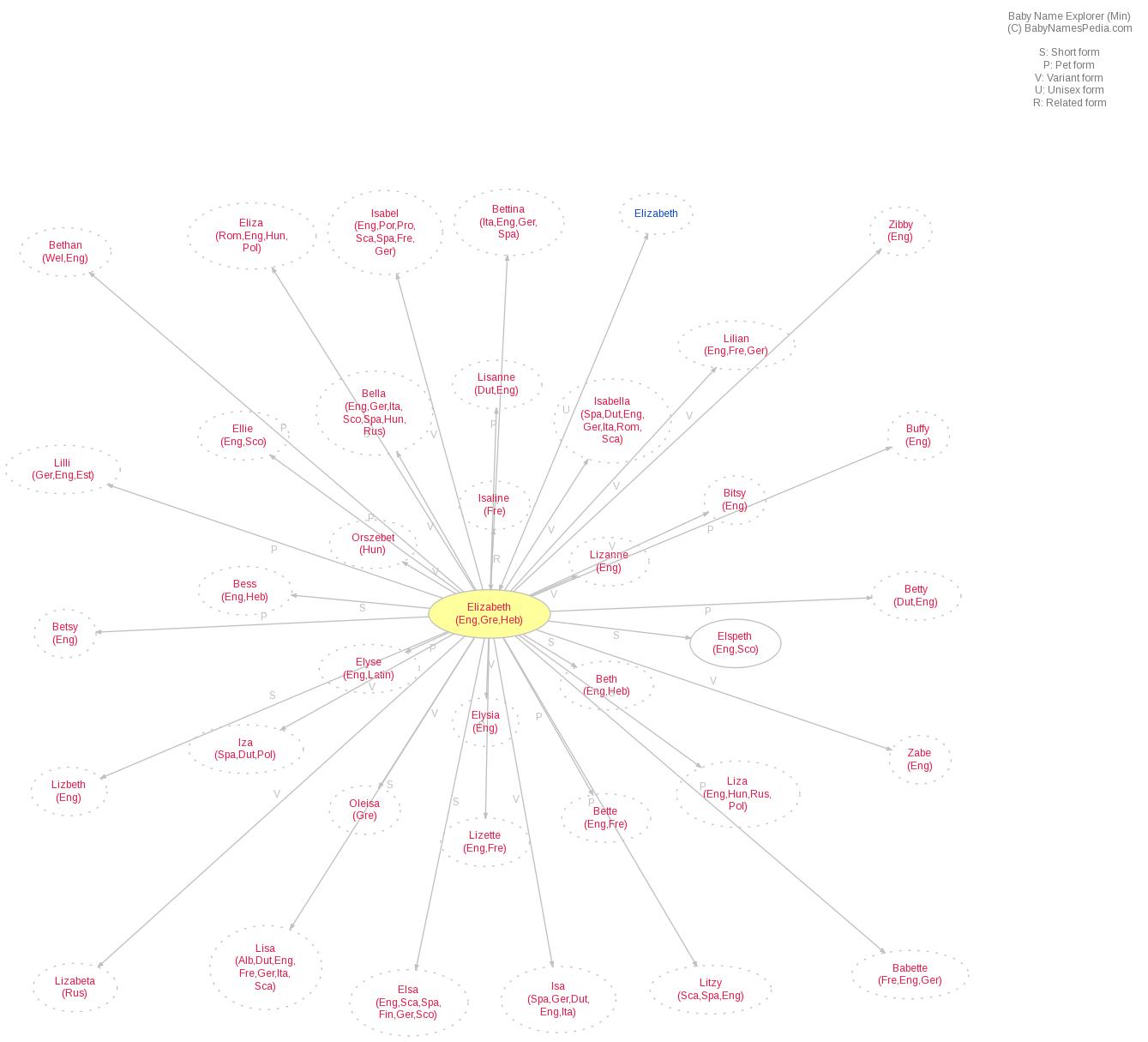