What does Elke mean?

[ syll. el-ke, elk-e ] The baby girl name Elke is pronounced EHLK- †. Elke has its origins in the Germanic, Old Provençal, and Hebrew languages. It is used largely in Dutch, Frisian, German, Yiddish, and Hebrew. From Hebrew roots, its meaning is 'God has created, God has bought, God has possessed, God is zealous' - in this context, Elke can be used in the Hebrew language. It is a biblical name derived from el which means 'God, powerful' ; kanah. The generic name has been used in the Old Testament of the Bible.

In addition, Elke is a form of the English and Italian Adelaide.

Elke is also a familiar form (Dutch, Frisian, and German) of the Dutch, German, and Scandinavian Adelheid.

Elke is also a familiar form (Dutch, Frisian, and German) of Alice.

Elke is also a form (Yiddish) of the English Eleanor.

Elke is the feminine version of the English Elkanah.

Elke is not popular as a baby girl name. It is not in the top 1000 names. In 2018, out of the family of girl names directly related to Elke, Eleanor was the most widely used. 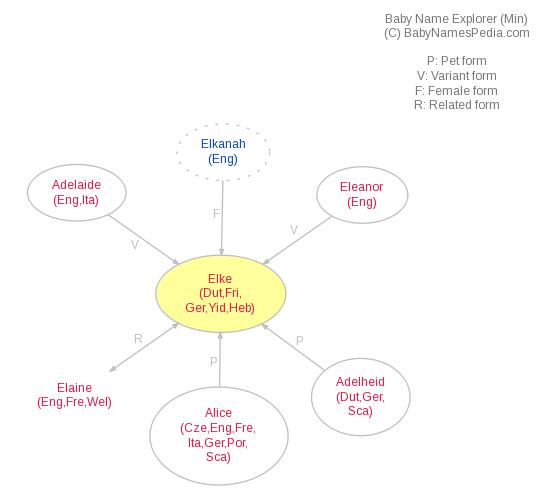