What does Ellen mean?

[ 2 syll. el-len, ell-en ] The baby girl name Ellen is pronounced as EHLLahN †. Ellen is used chiefly in the Dutch, English, and Scandinavian languages. Its origin is Old Provençal and Old Greek. From Old Greek roots, its meaning is bright one, shining one - in this context, Ellen can be used in the English and Scandinavian languages. It is derived from the word 'helios' meaning sun. The name was used as an English form of Helen in the 16th century, formed by dropping the initial 'H-', similar to other names such as Hester and Esther. It is today often taken as an independent name.

In addition, Ellen is a diminutive of the name Eleanor (English) in the Dutch and English languages.

Ellen is also a variant of the name Helen (English) in the English and Scandinavian languages.

Ellen is a classic favorite. At present it is still a somewhat popular baby girl name, but not to the degree it was previously. At the height of its usage in 1946, 0.325% of baby girls were given the name Ellen. It had a ranking of #58 then. The baby name has seen a steep fall in popularity since then, and is today of modest use. In 2018, its usage was only 0.019% and its ranking #770. Within the family of girl names directly linked to Ellen, Ella was the most widely used. In 2018, it was more regularly used than Ellen by 23 times. 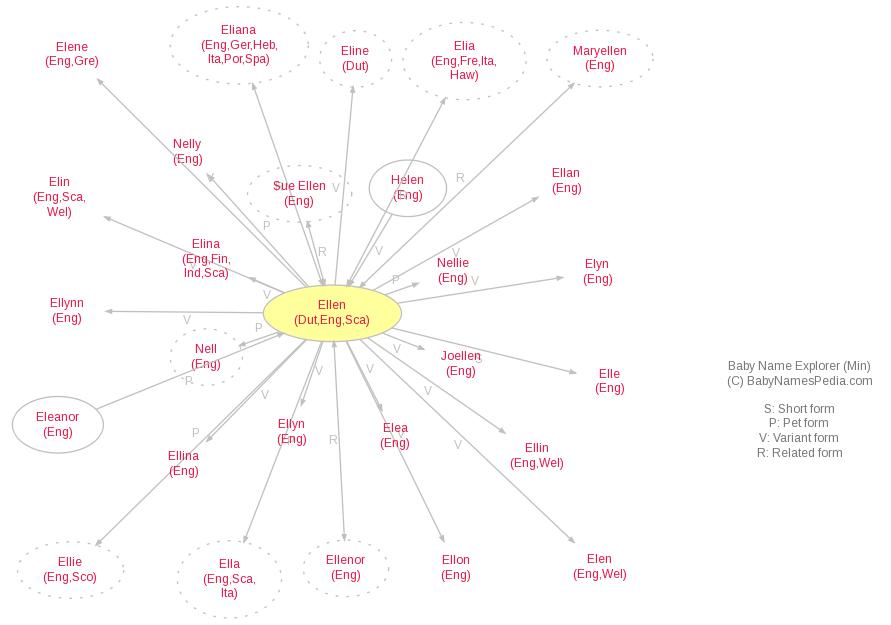