What does Ellis mean?

[ 2 syll. el-lis, ell-is ] The baby boy name Ellis is sometimes used as a girl name. Its pronunciation is EHL-ihS- †. Ellis is used chiefly in the English and Welsh languages, and its origin is Hebrew, Welsh, and English. From English roots, its meaning is my God is Yahweh - in this context, Ellis can be used in the English language. The first name is derived from the surname, which is itself from the first name Elias and ultimately Elijah. The first name has been used by English speakers since the 15th century. See Ellis for more information.

Ellis is a variant of Elias in the English language.

Ellis is also a variant of the name Elijah (English and Hebrew) in the English language.

Ellis is also a variant of the name Elisud (Welsh) in the English and Welsh languages.

Ellis is a widely used name; it has 24 variants that are used in English and other languages. Variants used in English include Elias (used in Czech, Dutch, German, Greek, Hungarian, Portuguese, Spanish, and Yiddish as well), Elice, Elis, Ellice, Ellise, Ellison, Elliss, Elliston, Ellys, Ellyss, Ellyston, and Elys.

Ellis is fairly popular as a baby name for boys, and it is also considered trendy. At the modest height of its usage in 1903, 0.085% of baby boys were given the name Ellis. Its ranking then was #160. The baby name has since markedly fallen in popularity. In 2018, its usage was 0.055% and its ranking #317, somewhat regaining its popularity in the recent decade. Within the group of boy names directly linked to Ellis, Elijah was the most widely used. In 2018, its use outnumbered Ellis' by 12 times. Ellis has in the past century been predominantly given to baby boys. In 2017, 3 times as many baby boys than girls were given the name Ellis. 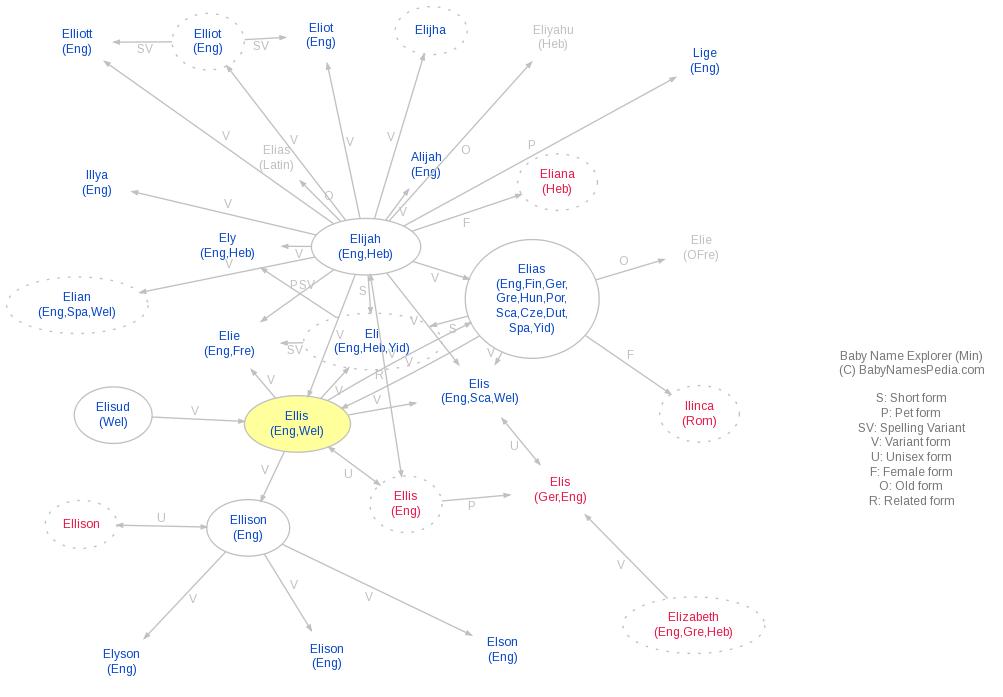