What does Elmo mean?

[ 2 syll. el-mo, elm-o ] The baby boy name Elmo is pronounced as EHLMow †. Elmo is largely used in the English, Italian, and Latin languages. It is derived from Germanic, Old English, and Old Greek origins. Germanic origin, English and Italian use: The name could be derived from the Germanic 'helm' (meaning helmet, protection), or else it could be from the diminutive of compound names with this first element. It later came into use as a diminutive of Erasmus. Saint Elmo (or Erasmus) was a 4th-century martyr after whom the electrical weather phenomenon St Elmo's fire was named. The name was adopted on an occasional basis by English speakers in the 19th century.

In addition, Elmo is an English, Italian, and Latin familiar form of the name Anselm (English, German, and Spanish).

Elmo is also an Italian variant transcription of the name Elmer (English and Scandinavian).

Elmo is also an Italian familiar form of the name Erasmus (English and German).

Elmo is also an Italian familiar form of the name Helmut (English and German).

Moe (familiar form in English) is another variant of Elmo.

Elmo is an unusual baby boy name. Its usage peaked modestly in 1909 with 0.045% of baby boys being given the name Elmo. It was #246 in rank then. The baby name has experienced a steep fall in popularity since then, and is now of sporadic use. Among all boy names in its family, Elmo was nonetheless the most commonly used in 2018. 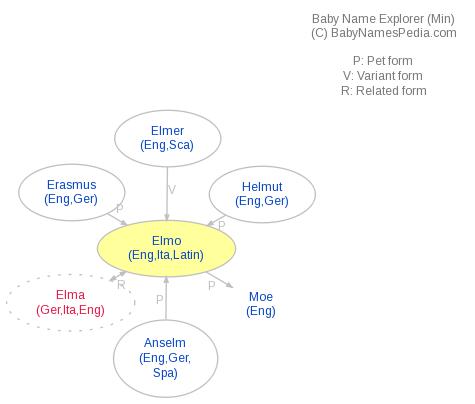