What does Eloise mean?

[ 2 syll. e-loi-se, el-o-ise ] The baby girl name Eloise is pronounced as ihLOYZ †. Eloise is largely used in English, French, and Spanish. Its origin is Germanic. The name is of obscure origin; it could be from Heilwidis (Germanic) or Helewis (Middle English), of the first element 'heill' (meaning healthy, safe, whole) and the second element 'witu' (wood, forest) or 'wit'. It could also be a form of Louise via the Provençal Aloys. It was first introduced in the 11th century to English speakers by the Normans. It was borne by Éloise or Héloïse (1101-1164), the ill-fated and beautiful wife of the French philosopher Peter Abelard. After her husband was castrated by her uncle, she became an abbess and her husband a monk; they kept in touch via letters, and each of them founded a religious institution. The name saw a revival among English speakers in the 19th century, in allusion to the fidelity of the medieval abbess.

Eloise is popular as a baby girl name, and it is also regarded as trendy. At the modest height of its usage in 1921, 0.108% of baby girls were named Eloise. It was #165 in rank then. The baby name has markedly slipped in popularity since then. In 2018, its usage was 0.094% and its ranking #167, enjoying a minor resurgence in the recent decade. Within all girl names in its family, Eloise was the 2nd most popular after Ellie. In 2018, the name was thrice as popular as Eloise. 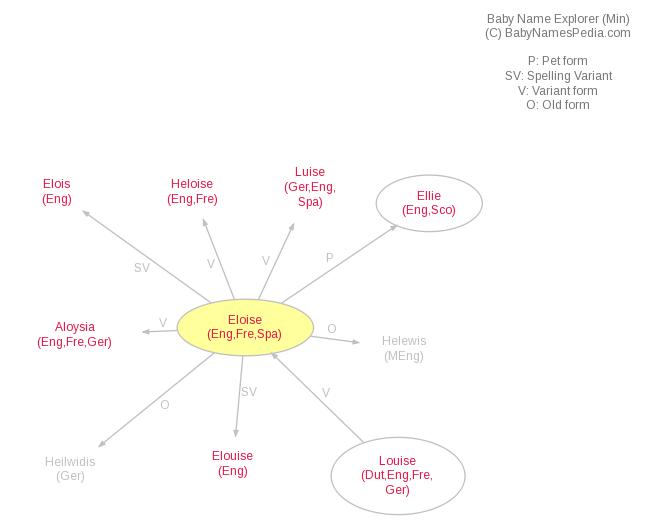