What does Elora mean?

[ 3 syll. e-lo-ra, el-ora ] The baby girl name Elora is pronounced eh-LAOR-aa- †. Elora is of Old Provençal origin and it is predominantly used in the English language. Elora is a diminutive of Eleanor (English).

Elora is a somewhat popular baby girl name, and it is also viewed as trendy. The name's popularity has been increasing since the 2010s; before that, it was of only sporadic use. At the modest height of its usage in 2018, 0.021% of baby girls were given the name Elora. It had a ranking of #724 then. In 2018, within the family of girl names directly linked to Elora, Eleanor was the most frequently used. It was 15 times more popular than Elora in that year. 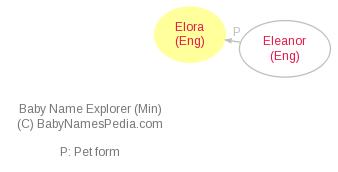