What does Elsa mean?

[ 2 syll. el-sa, els-a ] The baby girl name Elsa is pronounced in English as EHL-Sah or in German as EHL-Saa †. Elsa is an English, Scandinavian, Spanish, Finnish, German, and Scottish name of Germanic and Hebrew origin. The name was first popularized among English speakers by Wagner's romantic opera Lohengrin (1848), in which it appeared as the name of the heroine. It was also borne by the real-life Elsa the lioness (1956-1961), raised in captivity as a cub and later released in Kenya; she has been commemorated in the Joy Adamson non-fictional book Born Free (1960), the subsequent film (1966), and the song (1966) by John Barry.

In addition, Elsa is a derivative (English, Scandinavian, and Spanish) of Alice.

Elsa is also a diminutive of the English and Scottish name Elspeth.

The origin and meaning of the name Elsa is inherited by all variant forms.

Elsa is a classic favorite. Today it is still somewhat popular as a baby girl name, but to a lesser degree than it was in the past. The name has been growing in popularity since the 1940s. Its usage peaked recently in 2014 with 0.058% of baby girls being named Elsa. It had a ranking of #286 then. In 2018, its usage was 0.016% and its ranking #888. Among the family of girl names directly related to Elsa, Elizabeth was the most regularly used. In 2018, it was more frequently used than Elsa by 28 times. 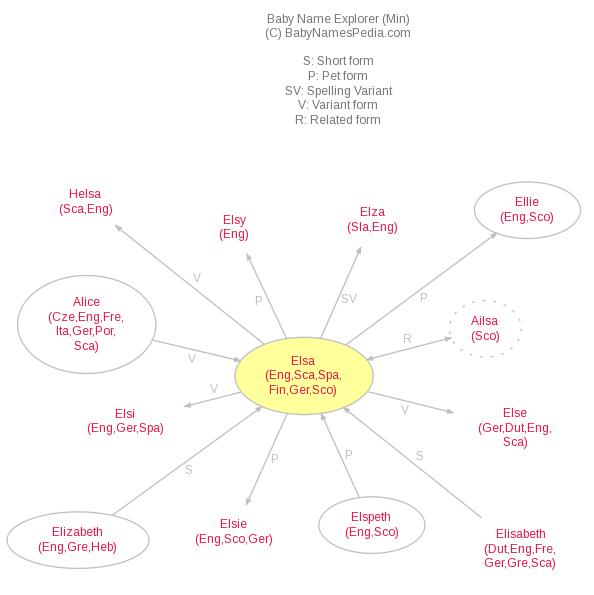