What does Elsie mean?

[ 2 syll. el-sie, els-ie ] The baby girl name Elsie is pronounced EHLSiy- †. Elsie is of Germanic and Hebrew origin. It is used mainly in the English, Scottish, and German languages.

Elsie is an English variant transcription of Alice.

Elsie is also an English and Scottish diminutive of Elizabeth (English, Greek, and Hebrew).

Elsie is also a diminutive of Elspeth (English and Scottish).

Elsy (variant spelling in English) is a form of Elsie.

Elsie is popular as a baby girl name, and it is also viewed as trendy. At the height of its usage in 1901, 0.687% of baby girls were given the name Elsie. It had a ranking of #35 then. The baby name has seen a marked drop in popularity since then. In 2018, it ranked at #280 with a usage of 0.064%, enjoying a minor resurgence in the recent decade. Within all girl names in its family, Elsie was the 3rd most popular after Elizabeth and Alice. Elizabeth was more regularly used than Elsie by 7 times in 2018. Elsie has mainly been a girl name, although in the last century it has also been used for boys. There were 81 times as many girls than boys who were named Elsie in 1911. 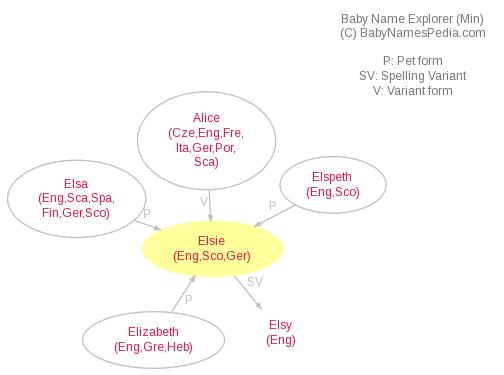