What does Elvira mean?

[ 3 syll. el-vi-ra, elv-ira ] The baby girl name Elvira is pronounced ehLVAYRaa- or ehLVIY-Raa- †. Elvira is of Gothic origin. It is used mainly in English, German, Italian, and Spanish. The meaning of Elvira is 'true to all, truly foreign, truly lively'. It is derived from al meaning 'all' ; ali 'foreign, other' ; gail 'lively' ; wers 'true'. An old form of the name is Geloyra (Gothic). The name is of obscure Visigothic origin; it could be from the first element al, ali (meaning 'foreign, other') or gail, combined with the second element 'wer'; with al the name is taken to mean 'true to all'. The name has been used by Spanish speakers since the Middle Ages, but English speakers first took it up only in the 19th century. It has often been associated with the arts, having appeared as the name of several characters including Don Juan's wife in Mozart's opera Don Giovanni (1789) and in Byron's satire Don Juan (1821), the ghost in Noel Coward's comic play Blithe Spirit (1941), and the central character in the Swedish film Elvira Madigan (1967) which was based on the dramatic life of a Danish tightrope walker of the same name. Elvira is the feminine form of the Italian Elviro.

Elvira is rare as a baby girl name. At the peak of its usage in 1909, 0.053% of baby girls were named Elvira. It was #256 in rank then. The baby name has fallen out of favor since then, and is used only on a very modest scale today. Out of the family of girl names directly related to Elvira, Ella was the most commonly used in 2018.

Baby names that sound like Elvira include Elvera (Dutch, English, German, and Spanish), Elfrea, and Elvire (French and German). 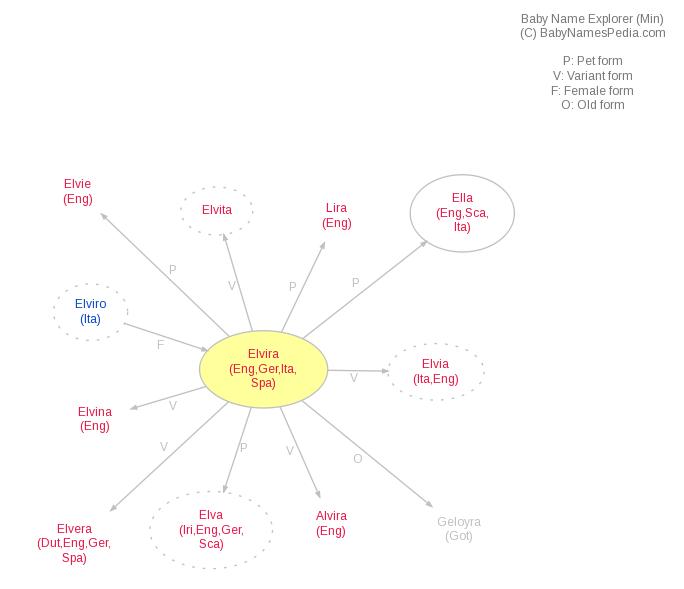