What does Elyssa mean?

[ 3 syll. e-lys-sa, el-y-ssa ] The baby girl name Elyssa is pronounced as EH-LihS-ah †. Elyssa is mainly used in English and Latin, and it is of Germanic, Hebrew, and Old Greek origin.

Elyssa is a variant form of Alice.

Elyssa is also a diminutive form of the English, Greek, and Hebrew name Elizabeth in the English language.

Elyssa is also a variant form of the English name Elysia in the Latin language.

Elyssa is rare as a baby name for girls. At the modest peak of its usage in 2004, 0.014% of baby girls were named Elyssa. It ranked at #890 then. The baby name has since suffered a marked decline in frequency, and is today of irregular use. Out of the group of girl names directly related to Elyssa, Elizabeth was the most popular in 2018. 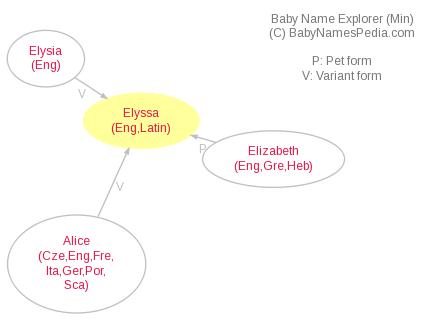