What does Emilie mean?

[ 3 syll. e-mi-lie, em-il-ie ] The baby girl name Emilie is pronounced EHM-ihL-iy- or ey-MIY-Liy- †. Emilie is of Latin origin, and it is used mainly in the English, French, German, Scandinavian, and Czech languages. It is derived from the element aemulus meaning 'imitating, rivaling'. From the Roman family name.

In addition, Emilie is a derivative (English and French) of the English, German, Dutch, Italian, Latin, and Spanish Amelia.

Emilie is also a variant spelling (Czech, English, French, German, and Scandinavian) of the English Emily.

Variants of Emilie include the English and Scandinavian pet form Milly and the German short form Mile.

Emilie is rare as a baby name for girls. At the modest peak of its usage in 2003, 0.033% of baby girls were given the name Emilie. Its ranking then was #454. The baby name has since markedly fallen in popularity, and is currently of only irregular use. Out of the group of girl names directly linked to Emilie, Amelia was the most popular in 2018. 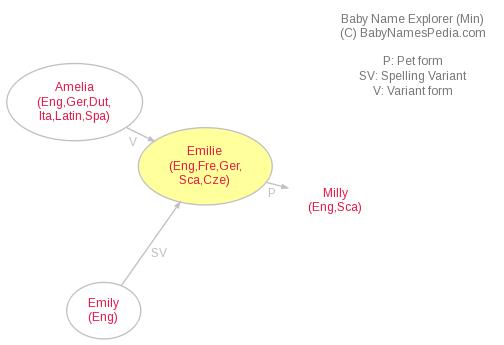