What does Emma mean?

[ 2 syll. em-ma, emm-a ] The baby girl name Emma is pronounced as EHM-ah in English †. Emma is primarily used in the English, Armenian, Catalan, Dutch, Finnish, French, German, Hungarian, Italian, Polish, Scandinavian, and Spanish languages, and its language of origin is Latin and Germanic. Germanic origin, Armenian, Catalan, Dutch, English, Finnish, French, German, Hungarian, Italian, Polish, Scandinavian, and Spanish use: The name originated as a short form of compound names such as Ermintrude or Irmingard, which begin with 'Erm-' or 'Irm-' and thus contain the element 'ermen' (meaning whole, immense, universal) or 'irmin' (whole, immense, universal). It was introduced to England by Emma of Normandy (985-1052), who married King Ethelred the Unready of England and later his successor King Canute the Great of Denmark; she was the mother of King Edward the Confessor with the former. The name was thereafter widely adopted by medieval English speakers. It later saw a revival in the 18th and 19th centuries, promoted by the fictional young women bearing the name in Matthew Prior's poem Henry and Emma (1709), Jane Austen's novel Emma (1815), and Gustave Flaubert's novel Madame Bovary (1856). It was also borne then by Lady Emma Hamilton (1761-1815), the mistress of Lord Nelson. The name is also used now as a diminutive of Emily despite the difference in etymology.

Emma is a diminutive form of the English name Emily.

Emma is a very popular baby name for girls, and it is also viewed as rather trendy. The name jumped in popularity from the 1970s up to the 2000s. At the height of its usage in 2003, 1.133% of baby girls were given the name Emma. It ranked at #2 then. The baby name has since experienced a fall in frequency. In 2018, its usage was 1.012% and its ranking #1, but it was nonetheless the most popular within all girl names in its group. In 2018, Emma was twice as popular as the 2nd most popular name, Emily. The name Emma has been mostly given to girls, though it has also been used as a boy name in the past century. In 1910, the name Emma was given to 76 times more girls than boys. 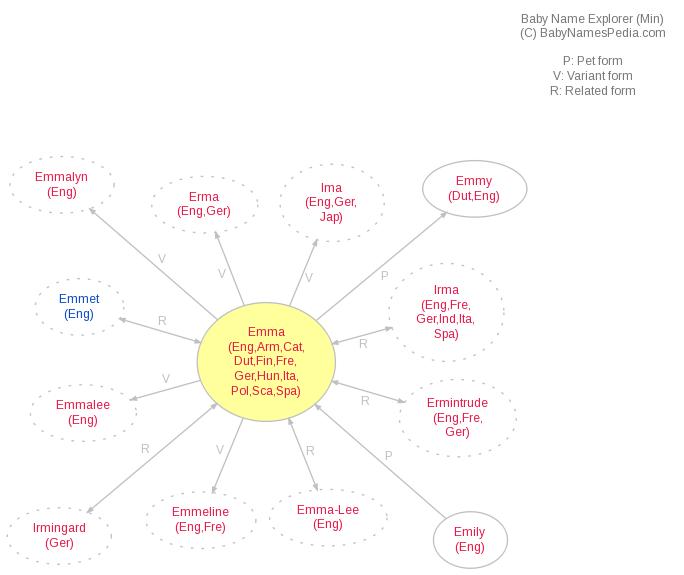