What does Emmeline mean?

[ 4 syll. em-me-li-ne, emm-el-ine ] The baby girl name Emmeline is pronounced as EHM-ah-LiyiyN †. Emmeline's language of origin is Latin and Germanic, and it is used largely in the English and French languages. Germanic origin: It is from the element amal which means 'work'. The name is of obscure origin; it could be derived via Ameline (Old French) from Amal (Germanic), or else it could be from Emma. It was first adopted by English speakers in the Middle Ages, and it saw a revival in the 18th century and was later incorrectly associated with Emilia or Emily. In literature, it has appeared in Harriet Beecher Stowe's anti-slavery novel Uncle Tom's Cabin (1852).

Emmeline is a variant transcription of Emily (English).

Emmeline is also a variant transcription of Emma.

Emmeline is somewhat popular as a baby name for girls, and it is also viewed as fairly trendy. The name's popularity has been growing since the 2010s; before that, it was of only irregular use. Its usage peaked modestly in 2017 with 0.020% of baby girls being given the name Emmeline. Its ranking then was #754. In 2018, it ranked at #784 with a usage of 0.019%. Among the group of girl names directly linked to Emmeline, Emma was the most popular. Its use outnumbered Emmeline's by 54 times in 2018. 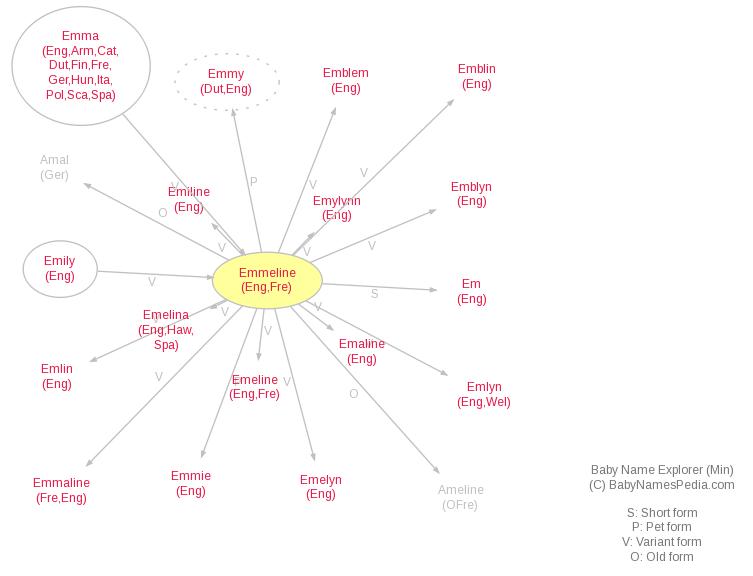