What does Ena mean?

Ena has its origins in the Latin language. It is used largely in English and German. The name could have developed from the diminutive of other names ending with the Latinate feminine suffix '-ena' or '-ina', or else it could be Anglicized from Eithne. It was popularized by Victoria Eugenie Julia Ena of Battenberg (1887-1969), better known as Queen Ena of Spain; in her case, Ena was the result of a misreading of her last name Eva on a handwritten note at her christening. In the UK, the name has in recent times been made known by the dreaded fictional character Ena Sharples in the long-running British TV soap opera Coronation Street (1960-).

Variant forms inherit the origin and meaning of the name Ena.

Ena's language of origin is African-Efik. Here, the meaning is beaded, adorned. The meaning refers to a long white bead worn as an ornament in Africa.

Ena is an English and Irish form of the English, Gaelic, Irish, and Scottish Eithne.

Ena is also an Irish form of the English Helen.

Ena is also a form of Ina.

Ena is uncommon as a baby name for girls. At the height of its usage in 1906, 0.028% of baby girls were given the name Ena. Its ranking then was #354. The baby name has since experienced a marked decline in frequency, and is now used on a very modest scale. Within the group of girl names directly linked to Ena, Helen was the most popular in 2018. 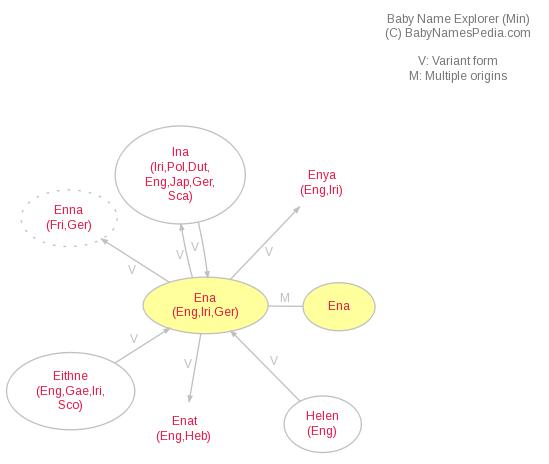