What does Enrico mean?

[ 3 syll. e-nri-co, en-r-ico ] The baby boy name Enrico is pronounced as eh-NRIY-Kow †. Enrico is used predominantly in Italian and its origin is Germanic. Enrico is a variation of the name Henry (English).

Enrico is rare as a baby boy name. At the peak of its usage in 1921, 0.008% of baby boys were named Enrico. It was #660 in rank then. The baby name has experienced a loss in popularity since then, and is currently of very modest use. In 2018, out of the family of boy names directly related to Enrico, Henry was the most regularly used. 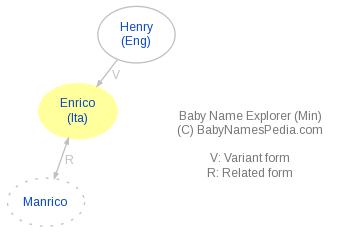